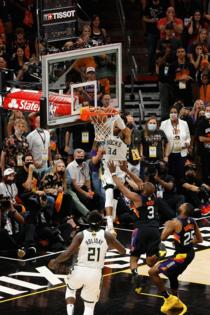 PHILADELPHIA — It must deliver an exquisite joy to anti-Processors to see Sam Hinkie's biggest mistakes win an NBA title before "The Process" bears any fruit.

It must deliver equally an exquisite pain to the diminishing Cult of Hinkie to see their eight-year embarrassment not only continue, but to be proven worthless; to be discounted completely, and without any possible argument.

That's because the pillars of the Milwaukee Bucks' NBA title, Giannis Antetokounmpo and Jrue Holiday, could have been in South Philadelphia for the past eight seasons. Playing together. Growing together.

Instead, the Sixers chose a path of shame — one that will leave a stain on the team and the city that never will come clean. They lost on purpose for four years. They have three playoff series wins to show for it. The Bucks have the Larry O'Brien Trophy.

Given the developments of the past week, the first draft of The Process — Hinkie's formal introduction as an NBA power broker — was, arguably, the worst.

On June 27, 2013, Hinkie agreed to trade Holiday for Nerlens Noel and a future first-round pick. He then drafted Michael Carter-Williams with the 11th overall pick, four slots ahead of Antetokounmpo.

On Tuesday, Giannis and Jrue became NBA champions. Joel Embiid and Ben Simmons — the two crown jewels of this interminable, abominable plan — had been idle for nearly a month after a third second-round exit, and they watched in envy, while legions of Processors gnashed their teeth.

SEATTLE — As promotional campaigns go, the advertising in support of Breanna Stewart’s WNBA MVP candidacy is a slam dunk and the Storm marketing brain trust should win an award for their fun and creative effort.

MIAMI — As strength and conditioning coach Bill Foran begins retirement after 33 years with the Heat, he has a message for fans: You will see a different Tyler Herro this season.

“He has totally dedicated himself to ...Read More

NEW YORK — Not all Nets players are fully vaccinated, at least not yet.

Jon Scheyer's strong early start to his Duke head coaching career on the recruiting trail jumped another level on Monday.

Dereck Lively II, a five-star center rated as the No. 2 player in the class of 2022, committed to ...Read More

The Clippers historically broke ground on a new arena Friday in Inglewood, a move completing their graduation from NBA renters into ...Read More

To commemorate its 25th anniversary, the WNBA asked fans to choose who is the league's greatest from its "The W25," a collection of all-time top players. The two-week voting window on WNBA.com and Twitter end at 9 p.m. ...Read More