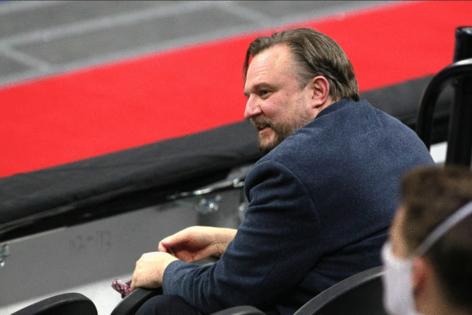 PHILADELPHIA — Could the 76ers trade the No. 28 pick in Thursday’s NBA draft at the Barclays Center?

A league source confirmed the team has had discussions about parting with the pick if they can get value in return. The Sixers are open to trading it for future assets or a veteran player.

Trade discussions could heat up early next week, though it’s not a certainty that they’ll trade the pick. The Sixers also have a second-round pick (50th).

It shouldn’t come as a surprise that the Sixers are thinking about trading their first-round pick. Daryl Morey, the Sixers president of basketball operations, served as Houston Rockets general manager from May 2007 until October 2020. The Sixers officially hired him on Nov. 2.

Under the direction of general manager Elton Brand, the Sixers went on to select Tyrese Maxey with the 21st overall pick in the 2020 draft. New to the team, Morey, for the most part, kept Brand’s draft strategy intact.

However, Morey was known for trading first-round picks with the Rockets. The Rockets’ last first-rounder was Sam Dekker (No.18) in the 2015 draft.

A player selected 28th in the draft probably won’t help the Sixers win the 2022 NBA title. He may have a tough time getting in the rotation and would be more of an NBA G-League player.

Plus, the Sixers are gauging teams’ interest in acquiring three-time All-Star Ben Simmons via a trade. They’re in no rush to part with Simmons for what they perceive are unsubstantial offers. The Sixers are only prepared to make a move if they receive an All-Star player in return.

A lot can change in regard to roster needs if the Sixers trade Simmons.

In addition to Simmons, the Sixers have to focus on free agency, which begins on Aug. 2 at 6 p.m. The team must decide whether to bring back soon-to-be free agents Furkan Korkmaz, Dwight Howard, and Danny Green. All three played key roles on a squad that posted the Eastern Conference’s best record this season. The Sixers must also decide which free agents to go after.

The Sixers and the Boston Celtics are interested in signing New York Knicks swingman Reggie Bullock, according to the New York Post.

In other news, the Sixers have brought players in and recently worked out Arizona State wing Josh Christopher, according to sources. Christopher is projected to be selected late in the first round or early in the second round.

PhillyVoice was first to report the Sixers are willing to trade their first-round pick.