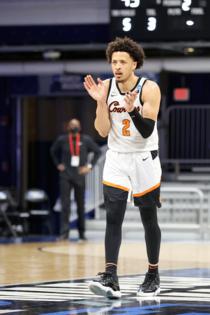 DETROIT — Cade Cunningham, the Pistons’ likely selection with the No. 1 overall pick in next week’s NBA draft, is looking to make an immediate impression on the Detroit sports scene.

During his visit to work out for the Pistons ahead of the draft, Cunningham received a warm reception at Comerica Park, with fans chanting: “We want Cade!”

Even before that, the city already had made an impression on him.

“I love Detroit. I've already been listening to Detroit music and things like that way before the draft lottery or any of that stuff,” Cunningham said Friday on a media call. “I was already hip to the culture in Detroit. It's a city that has a lot of things going on and I feel like getting a sports team rolling again would be huge for the city.”

Picking Cunningham would be a boost for the Pistons, who are coming off 22-50 record last season. They won the draft lottery for the first time in franchise history and they look to be focused on Cunningham, who was an All-America selection in his one season at Oklahoma State.

He’s poised to bring that star power to Detroit.

Cunningham said he was impressed with the Pistons organization during his meeting last week, including the front office and some time with team owner Tom Gores.

“I took a lot away from (the meeting). The organization has a lot of great people within it, starting from the owner,” Cunningham said. “Troy Weaver is a great general manager and then all the way down, they've got just great people throughout. I learned a lot on my visit and if they take me, I'd definitely be excited to be there. They're a great organization and they've got a lot of good things going for them.”

In assessing their roster, Cunningham said he was impressed with Saddiq Bey and Isaiah Stewart, who made the NBA All-Rookie Team, and saw the young core as a positive for the overall arc that the team is taking.

He even has taken the vernacular for the rebuild, adopting Weaver’s preferred label.

MINNEAPOLIS — The last time the Timberwolves were relevant, Jimmy Butler was leading them to 47 wins and a playoff berth in 2017-18 as the unquestioned best player on that team. Yes, better than Karl-Anthony Towns. Twice...Read More

The Warriors have been linked to disgruntled Philadelphia 76ers star Ben Simmons for months, and Wednesday, the NBA fined Warriors owner Joe Lacob $50,000 for violating the league’s anti-tampering rule for comments he ...Read More

The Sixers coach said Wednesday in an interview with Stephen A. Smith on ESPN’s "First Take" that the team �...Read More

LOS ANGELES — Russell Westbrook is producing a documentary of which he's the subject — a look at one of the NBA's more private players through his own lens.

When it comes to ...Read More