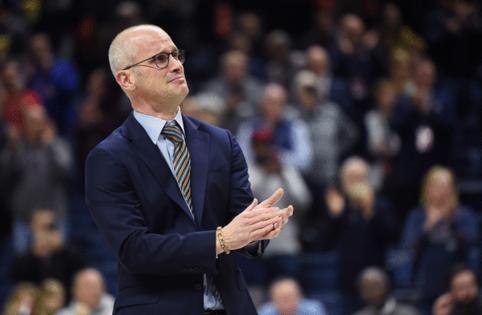 HARTFORD, Conn. — UConn men’s basketball probationary period — which included a reduction in scholarships and recruiting restrictions — has concluded, the NCAA informed the university.

The penalties, which came as a result of a number of recruiting violations in the Kevin Ollie era, lasted from 2018-20. The NCAA deemed that UConn fulfilled all of its obligations and is compliant with the associations regulations.

“Although the probationary period has concluded, we will continue to be committed to adhering to the highest standard of NCAA compliance,” UConn director of athletics David Benedict said in a statement. “I feel that we have emerged stronger than ever and look forward to a bright future for UConn Athletics.”

The allegations against Ollie included impermissible contact with a recruit, arranging phone calls between a recruit and Ray Allen and Rudy Gay, providing impermissible meals to two recruits on a visit and failing to monitor trainer Derek Hamilton, who held workouts with UConn players on campus and at his home.

Sanctions from the NCAA included a reduction of one scholarship for the 2019-20 season (which the university self-imposed), a $5,000 fine (self-imposed) and a number of limitations on recruiting visits and communications. Ollie, who was fired in March of 2018 after seven seasons as head coach, received a three-year show-cause penalty from the NCAA and has not coached at the collegiate level since. He since filed a grievance against the school, seeking $10 million in back pay.

In April, Ollie was hired as coach and director of player development for Overtime Elite, an alternative basketball league for elite-level high school aged prospects.

MINNEAPOLIS — The last time the Timberwolves were relevant, Jimmy Butler was leading them to 47 wins and a playoff berth in 2017-18 as the unquestioned best player on that team. Yes, better than Karl-Anthony Towns. Twice...Read More

The Warriors have been linked to disgruntled Philadelphia 76ers star Ben Simmons for months, and Wednesday, the NBA fined Warriors owner Joe Lacob $50,000 for violating the league’s anti-tampering rule for comments he ...Read More

The Sixers coach said Wednesday in an interview with Stephen A. Smith on ESPN’s "First Take" that the team �...Read More

LOS ANGELES — Russell Westbrook is producing a documentary of which he's the subject — a look at one of the NBA's more private players through his own lens.

When it comes to ...Read More