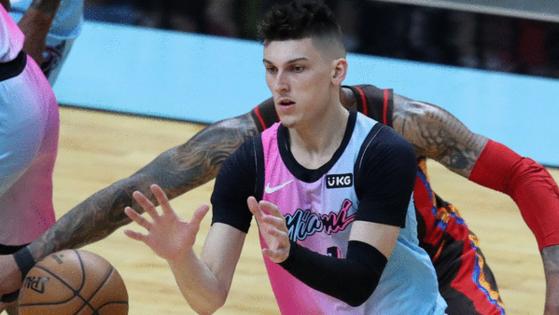 MIAMI — For the Miami Heat’s Tyler Herro, this summer has brought many firsts for him.

Herro’s first opportunity to work with the USA Basketball program as a professional player since the Heat drafted him out of Kentucky in June 2019 came this month.

He’s in the midst of his first “real” offseason as an NBA player after the COVID-19 pandemic altered the schedule for his first two NBA seasons and resulted in the Heat and Herro having seven weeks off between their trip to the 2020 NBA Finals and the start of this past season.

But one constant of Herro’s brief NBA career has been hearing his name included in trade rumors, with the 21-year-old guard determined to block out the noise entering his third professional season.

“I’m done listening to all that, honestly,” Herro said on Wednesday when speaking to reporters at FTX Arena during an appearance at the Jr. Heat summer camp. “Every time we’re not playing, or even if we are playing, my name’s brought up in something.

“So, it is what it is at this point. I’m focused on getting better and getting this team better.”

A key part of this offseason for Herro is continuing to add weight to his 6-foot-5, 200-pound frame — the measurements he was listed at last season.

He said he’s gained four pounds so far this summer since the Milwaukee Bucks eliminated the Heat in the first round of the playoffs on May 29, with his goal being to put on 10-12 pounds during the offseason.

The NBA scheduled the start of next season training camp for Sept. 28 ahead of an Oct. 19 start to the regular season.

“This is really my first offseason, so I’m able to really have a regiment,” he said. “Having a certain amount of calories I eat in a day. I’m getting stronger every day and putting on weight.

In NBA fantasy land — aka the offseason — anything goes.

And in this fantasy land, the Warriors (and Draymond Green) want to trade their picks (Nos. 7 and 14) in the NBA Draft in exchange for a younger player who is ...Read More

The Bucks finished dead-last in the cavernous...Read More

MILWAUKEE — Standing outside Fiserv Forum in a massive crowd that grew larger by the second, Lue Lueck wore a green jacket in the style of the Milwaukee Bucks’ 1971 championship team, dreaming that this would be the ...Read More

PHILADELPHIA — Should they go in? What are the odds? It’s not even a real run?

A pair of 24-year-olds, Bryan Daniel, of Newark, Del., and his high school friend, Darren Moore, leaned against the hood of Moore’s ...Read More

BALTIMORE — After a promising freshman year as a small forward for the Johns Hopkins men’s basketball program in 1993-94, Wes Unseld Jr.’s sophomore campaign ended almost as soon as it began because of a torn ACL in ...Read More