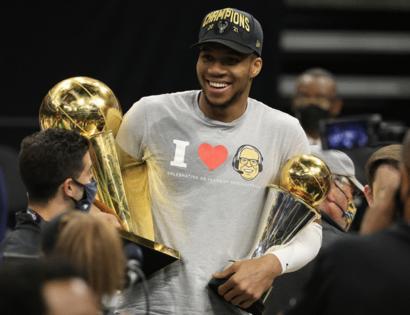 The Bucks’ newly crowned champion and Finals MVP hopped on Instagram Live Wednesday morning still celebrating his team’s historic win with the team’s trophy. And rightfully so. Basketball is a team sport, but no one worked as much as he did over the years to fulfill the promise he gave himself and the city of Milwaukee: to win an NBA championship.

So on Wednesday morning, Antetokounmpo drove with his girlfriend to a local Chick-fil-A for a 50-piece nugget box and some half Sprite and lemonade, still holding all his trophies.

“My babies. I woke up like this,” Antetokounmpo sang, dancing in his car, pointing the camera to his MVP chip in his arms and the team chip between his legs on the way for food. “It’s 10 a.m. and I haven’t slept at all. I haven’t slept even for one minute. Eventually I’m gon crash. Wooooooo, Milwaukee. OK I gotta return the trophy to the team. I stole it. I stole the trophy from the organization. They’re looking for the trophy.”

This we already knew. Antetokounmpo shared a photo Tuesday night of the two trophies tucked into his bed. He explained why he took them on Wednesday.

“These trophies are not leaving my sight,” he said, wagging his finger in the air. “What if all of a sudden I wake up and this is all a dream. These trophies are my security, basically. Like, I touch them and I know this is real.”

At the restaurant, he included the Chick-fil-A worker in his video and ordered, “a 50-piece mac minnies, 50 exactly. Not 51, not 49. Chicken minnies, yes. Fifty.”

Antetokounmpo scored 50 points in the Bucks’ Game 6 win over the Suns on Tuesday.

As he pulled further into the restaurant’s lot, fans and even a camera crew started to notice (or they recognized where he was from his IG) and started to meander towards his car. “How the hell camera? This guy showed up here so fast.”

His adoring fans poured on the love and gave him fist bumps before moving out of the way so his car could move forward.

“This is why I love playing the game. Moments like this,” he said.

By the time his car reached the side of the drive thru, his car was completely surrounded and everyone (yes, including Antetokounmpo) was chanting “Bucks in 6!”

He even let one lucky fan reach into the car to touch the trophy before collecting his food and (only half jokingly) trying to get an endorsement from the restaurant.