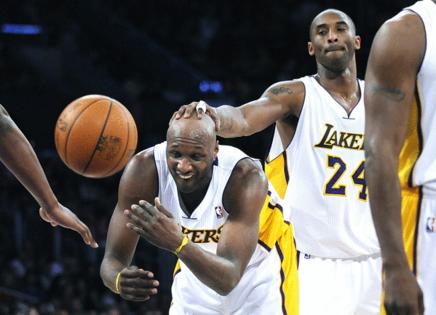 LOS ANGELES — Lamar Odom has been training until 3 a.m. most nights to prepare for his exhibition boxing match against pop star Aaron Carter, but he feels "really good" after finding a strategy to combat his post-traumatic stress disorder.

October will mark six years since Odom was in a coma, when he suffered 12 strokes and six heart attacks after taking a lethal combination of cocaine and alcohol amid other substances and was found unconscious inside a Las Vegas brothel. In 2017, he met psychedelic consultant Mike "Zappy" Zapolin after a friend attended a screening of Zapolin's 2016 documentary "The Reality of Truth," which chronicles his own journey to find internal peace through psychedelics. Zapolin created a formula for Odom's healing journey that consisted of microdoses of ketamine, an ibogaine treatment and daily meditations.

This process is shown in the documentary, "Lamar Odom Reborn," which was released last month. The events of the film take place in 2018, but its release was ideal for the spring of 2021 after the pandemic shutdown caused depression and anxiety to skyrocket.

"During the pandemic, I wish we had more of [the treatments] on every corner, we could hand them out for free," Odom said in a phone interview with The Los Angeles Times from Atlantic City, where he's set to fight Carter on Friday night. "During this pandemic, everyone's been in jail for a year and a half. A lot of us aren't built to be in prison."

Odom's own mental prison was triggered by the death of his mother when he was 12 years old, the death of his 6-month-old son Jayden and the passing of his cousin. Zapolin applauds Odom's bravery to speak about mental health issues, especially with the stigma in the Black community, which Odom addressed in the film.

"As an African American man, we feel like if we seek help, it's like weak," Odom said. "We just have to realize that health is wealth and without mental health, you can't accomplish s---."

"Lamar Odom Reborn" shows Odom's reconciliation with his former partner Liza Morales and his children. Although Odom's relationship with Khloe Kardashian has been cited as part of his downfall, there was a positive to being a part of the famous family.

"I have let people film me since, but not my first time where I didn't know how I was going to react," Zapolin said. "But [Lamar is] so media-trained, and I think maybe his experience with the Kardashians, he dropped his even thinking about a camera being on him, so when I was like 'Hey, Lamar, do you mind if I film this because I think if we share it, it's going to help a lot of people potentially,' he was like, 'Yeah.' "

Ketamine is a hallucinogenic used as a street drug sometimes referred to as "Special K" or "horse tranquilizers" because of its use for veterinary purposes. In 1999, it was designated as a Schedule III substance by the Drug Enforcement Administration and Department of Health and Human Services. This means it has moderate potential for abuse and dependence and has been recognized as having medical benefits. Other substances in this classification include codeine and anabolic steroids.

Colorado is proposing a bill that restricts the medical use of ketamine in the wake of the 2019 death of 23-year-old Elijah McClain, who was injected with ketamine while in police custody.

The Hawks have been here before, not that long ago.

Returning home for games 3 and 4 of a playoff series after escaping with a narrow win in Game 1 and losing Game 2 on road.

The opponent is quite different this time, as...Read More

PHILADELPHIA — The funny thing about history is that it can be hard to tell when it's happening. The line between "notable" and "historic" is a tough thing to draw in real time. But it might be time for us to start ...Read More

As former Miami Heat icon Dwyane Wade takes his newfound sideline role as Utah Jazz part owner, it’s as if he is quoting from The Godfather, if not from Pat Riley, himself.

“It’s about business,” Wade said in a GQ...Read More

These NBA playoffs have to be so frustrating for Warriors fans to watch.

Seeing the Suns, Nuggets, Clippers, and even the Jazz compete for the Western Conference crown is such a tease.

This series matches the brawny against the scrawny. Joel Embiid could bench-press the Hawks’ starting five. But the beauty of basketball — and these Hawks often are lovely to watch — is that a supposed big man’s ...Read More