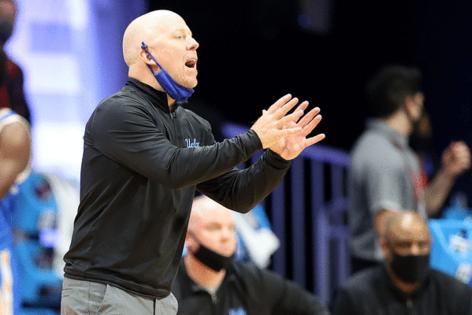 LOS ANGELES — Any coach would find Amari Bailey tantalizing. The wiry athleticism. The devastating first step that leaves tormented defenders in his wake. Mick Cronin told the high school standout that he'd love to have him at UCLA, but in the meantime the coach suggested that the left-hander work on going to his right more and developing a consistent jumper.

Any coach would find Peyton Watson tantalizing. The ability to get to the rim in a flash. The multiple growth spurts suggesting that at 6 feet 9 he might not be done sprouting. Cronin told the high school standout that he'd love to have him at UCLA, but that he would have to earn a starting spot.

Any coach would find Will McClendon tantalizing. The unwavering grit. The willingness to play and defend any position. Cronin told the high school standout that he'd love to have him at UCLA, but it would be great if he could learn more about the pick-and-roll play and moving with purpose off the ball.

To be a Bruins basketball recruit means hearing less about how great you are than how far you have to go. Those who require coddling and assurances of a starring role best look elsewhere. The only promises Cronin makes are that you will work hard and get better.

"I mean, it's what I wanted to hear," said Bailey, the Chatsworth Sierra Canyon junior guard who might be the best player in his class. "You know, oftentimes you'll get lured in because programs are telling you what you would like to hear, not what you need to hear, and I just know that everyone on that coaching staff and everyone on that campus has my best interests and I'm thankful to be in an environment like that."

Judging by the slew of top high school prospects who have pledged their allegiance to UCLA, Cronin's blunt approach is resonating with almost everyone besides his recruiting rivals. Among others, the coach has lured Watson, the Long Beach Poly senior who will end the Bruins' two-year drought of not having a McDonald's All-American on their roster, and Bailey, part of a 2022 class that could become the best in the country.

Both players picked UCLA before the Bruins' unexpected Final Four run made them an even more fashionable pick for elite recruits. Rather than being put off when told he wasn't promised a starting job — an assurance other schools pursuing him had been quick to make — Watson was further sold on the idea of playing for Cronin.

"I loved it," Watson said. "I know Mick is a straight shooter, so hearing that from him validated that, obviously. He's always been honest with me throughout the entire recruiting process."

Cronin called his candor with prospects "front-end recruiting" because it provided a primer of what to expect when playing for him. His honesty had the added benefit of weeding out those who either won't put in the necessary work or would be unhappy doing so.

"I've tended to end up with players that want to hear the truth," said Cronin, who has capitalized on his access to the bountiful Southern California recruiting base by signing the top local player in the classes of 2021 (Watson) and 2022 (Bailey). "You know, let's talk about what you need to get better at to achieve what you're trying to achieve. I don't recruit and say, 'Hey, you're going to shoot every ball, you're going to be the best player, the offense is going to run through you.'

NEW YORK — Spencer Dinwiddie declined the player option on the final year of his contract and will hit unrestricted free agency on Aug. 6, according to a league source. The deadline to make a decision on the option, ...Read More

Trae Young led the No. 5 seed Hawks to victory, 116-113, vs. the No. 3 seed Bucks in Game 1 of the Eastern Conference finals Wednesday in Milwaukee.

The Hawks entered the fourth quarter with a three-point lead but the ...Read More

As Daryl Morey surveyed the wreckage of a season on Tuesday morning, the Sixers’ president of basketball operations looked and sounded like a man who knew that he had just lost the opportunity of a lifetime. And that’s...Read More

The Boston Celtics have found their coaching replacement for Brad Stevens.

According to ESPN's Adrian Wojnarowski, Boston is finalizing a deal to make Brooklyn Nets assistant Ime Udoka the next head coach of the Celtics. ...Read More

The Orlando Magic must shake off the sting of missing out on a higher pick — particularly the No. 1 spot — for the NBA Draft and turn their attention toward their pre-draft work.

It’s about to ramp up.