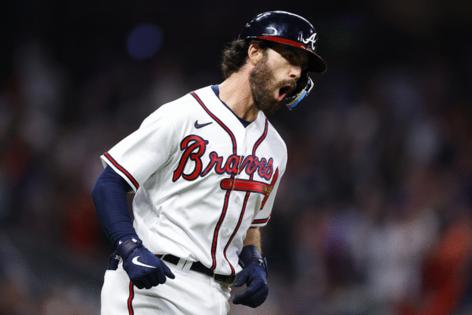 ST. LOUIS — During a recent Adam Wainwright media session that would have made for one compelling podcast, the 41-year-old veteran spoke at length about the sense he will leave the Cardinals in a good place when he walks away after this upcoming season.

The comment forced Wainwright to admit there was a span, specifically during three consecutive missed postseasons between 2016-18, where the Cardinals let their standards slip and suffered the consequences.

Wainwright still sees Jason Heyward's free-agent departure to the Cubs before the 2016 season as a sign things were off. The outfield grass of Wrigley Field looked greener to a free agent the Cardinals wanted to keep.

"He wasn't wrong," Wainwright said, "because we missed the playoffs the next three years, and he went over there and won a World Series."

Fitting, then, that a free agent who just chose to come from Chicago to St. Louis provided another sign. It thrilled Wainwright to hear new Cardinals catcher Willson Contreras describe how an Albert Pujols home run against the Cubs last season helped drive Contreras to his new home. The Cardinals are appealing to free agents again. They are hunting their fifth consecutive postseason appearance after those three postseasons missed. Last season's first-place finish in the National League Central marked their first since 2019, and this season offers them the chance to repeat as division champs for the first time since they did it three consecutive times between 2013-15, back before the stretched of missed postseasons that still sticks in Wainwright's craw.

A lot of Cardinals talk lately has centered on how an expanded postseason means winning the division is no longer good enough. Perhaps, but fast-forwarding there tends to overlook that the Cardinals have just two first-place finishes since 2016. Resuming the run as division champs would be another sign the Cardinals are back atop their perch for good. It's quite possible the biggest threat to spoil it from happening this season is the Cardinals' biggest rival.

ESPN is praising the Cubs for their "sneaky-big step forward" this offseason. CBS Sports has named the Cubs as one of the offseason's most-improved teams. Even the harshest critics of Cubs president of baseball operations Jed Hoyer's moves — those would be Cubs fans still fuming over the departure of favorite players who helped lead the Cubs to their 2016 World Series — are giving the decision-makers at Wrigley Field some props for rediscovering the desire to try.

Writing off the Brewers (86 wins in 2022) is never wise. They made four consecutive postseasons before missing last season's final wild-card berth by one game to the Phillies, who shoved the Cardinals out of the bracket. Had the Milwaukee front office not made the brain-dead mistake of dealing All-Star closer Josh Hader at the trade deadline, who knows what could have happened. All-Star starter Freddy Peralta's shoulder is healthy again, meaning a top-heavy rotation is back. Jesse Winker and William Contreras, brother of Willson, join the lineup. Manager Craig Counsell almost always gets more wins out of his club than it appears to have on paper.

As for the Reds and Pirates, not much to see. No cheap shots necessary. Just sadness. Pittsburgh and Cincinnati both deserve better. But the Cubs? They're ... something. Not scary, like they once were. But certainly compelling. Competitive.

They finally stopped shipping out core pieces and started signing new faces. They pledged away more than $300 million in contract commitments. They added more players than any team not named the Mets.

The pitching looks a little shaky. The defense looks pretty good and rather versatile. The offense, especially at Wrigley Field, could do some damage.

"Going into the offseason, I felt like when we strategized about how we could sort of maximize the dollars we had and the positions we had, we ended up really close to where we wanted to be," Hoyer said last week during the Cubs Convention in Chicago. "From that point, it's really satisfying. But ultimately, all that matters is how we play. I'm always very reluctant in the offseason. I've seen where people crush your offseason moves and you have a great year. And I've seen the other side of it, too."

It's hard to believe Hendricks, who hopes to help anchor Chicago's rotation as soon as he returns from a shoulder injury, is the lone active player from the Cubs' championship surge. That core is long gone. What has replaced it could make some noise. Because of the moves the Cubs made after losing Contreras, and the moves the Cardinals did not make after signing him, the battle for the NL Central could get more interesting than initially assumed. Before the Cardinals can worry about raising their aim from winning the division, they have to get back to proving they can do it annually.

The former Padre hit a new high on the Hall of Fame ballot revealed Tuesday, hitting 55 percent in his ninth year of eligibility. The nine-time All-Star will get ...Read More

ATLANTA — Andruw Jones authored an incredible career full of accomplishments, including an impressive string of Gold Glove Awards and a ton of home runs. During his prime, he was arguably the best center fielder in the ...Read More

NEW YORK — One of the weakest ballots in recent memory proved to be the perfect vehicle for Scott Rolen to make a historic leap to Hall of Fame immortality on Tuesday.

In becoming only the 18th third baseman elected to ...Read More

Scott Rolen vacuumed almost every ball that got hit in his direction in a 17-year major-league career spent with four teams, including the Phillies.

Tuesday night, he reeled in enough votes to be elected to the Hall of ...Read More

Miami Marlins chairman and principal owner Bruce Sherman in a statement Tuesday refuted a report in the Los Angeles Times that the Marlins “could go up for sale soon.”

“The Miami Marlins are not for sale, have not ...Read More

The grumpy neighbor who owns the dilapidated house on the corner has waded through the overgrown weeds in his front yard and removed the "For Sale" sign.

Five months after he started exploring a ...Read More