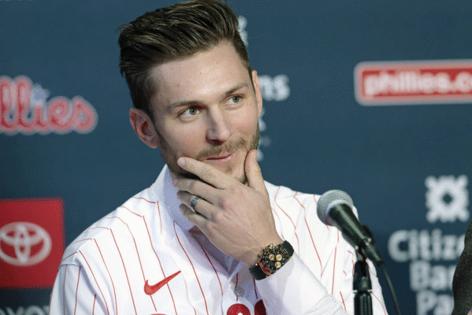 Last month — nobody seems to recall the exact date, but it was between the end of the World Series and Thanksgiving — Dave Dombrowski, Sam Fuld, and Rob Thomson flew to Florida, sat down at Trea and Kristen Turner’s dinner table, and talked.

“It was just an afternoon, just really informal to get to know one another,” said Fuld, the Phillies’ general manager. “No different than any other three-hour, non-meal event that occurs in life.”

But the message made all the difference. The Phillies delegation made sure the Turners knew that Trea was their top free-agent priority. They told the 29-year-old shortstop that they wanted him to play in Philadelphia for the rest of his career.

And that was how it happened. That was how Turner decided to walk away from more money from the San Diego Padres — $42 million more, to be exact — and sign an 11-year, $300 million contract with the Phillies.

“I didn’t really care to play the games and all that,” Turner said Thursday after buttoning up a red-pinstriped No. 7 jersey at a news conference at Citizens Bank Park. “I just asked them to be honest with me, and they were. And here we are.”

There were other factors, to be sure. With the Nationals, Turner played with Bryce Harper, whose opinions carry sway with Phillies owner John Middleton. Turner and Harper have remained friends, with Harper calling Turner “my favorite player in the league — it’s not even close.”

Turner also worked with hitting coach Kevin Long in Washington and texted him throughout the Phillies’ courtship. Turner’s wife grew up in Flemington, N.J., a one-hour drive from South Philly. Kristen Turner’s family still lives there.

But everyone likes to be recruited. Everyone wants to hear that they’re someone’s first choice. It was well known within baseball that the Phillies hoped to add a shortstop to a pennant-winning roster, and they had four star free agents from which to choose.

“[Dombrowski] told me right there,” Turner said, “that I was their No. 1 target.”

That stuck with Turner when San Diego entered the picture late in the process. The Padres drafted Turner in 2014, traded him a year later, and wished for a do-over. Their owner (Peter Seidler) and general manager (A.J. Preller) are every bit as opportunistic as Middleton and Dombrowski, the Phillies’ president of baseball operations.