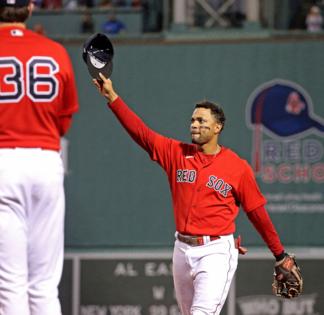 While John Henry, Tom Werner and rest of the Red Sox ownership group have been able to bring four trophies to Boston since purchasing the club in 2002, they’ve now thrown almost as many daggers into the backs of their most beloved franchise icons.

In the earliest hours of Thursday morning, when most team executives had packed their bags and hopped on planes to get back home after MLB’s Winter Meetings had finished, the Red Sox received some franchise-altering news.

Xander Bogaerts, who has played more games at shortstop than anybody in the club’s 100-plus-year-old history, had agreed to an 11-year, $280-million deal to join the San Diego Padres.

There, he’ll be a perfect fit.

He’ll be a mentor to help nurture some of the talented young players who have been lacking leadership and World Series pedigree. He’ll be a bridge who connects young players to old, and Spanish-speaking players to the English-speaking. He’ll be an everyday shortstop who rarely makes mistakes, runs the bases well, hits for power, hits for average and hits in the clutch. He’ll stand up in front of his locker when things are going poorly and answer questions so the others won’t have to. He’ll sign autographs and visit sick children in hospital beds.

This is who he is, and the Red Sox know it better than anybody.

It was Bogaerts’ best quality, his genuine ability to connect with people, that the Red Sox wanted to exploit.

Players and coaches in the clubhouse, fans in the stands, ushers and security guards in the stadium and anybody else in the community who happened to spend a little bit of time with Bogaerts over the years knew that he genuinely enjoyed himself in Boston. He loved every part of it.