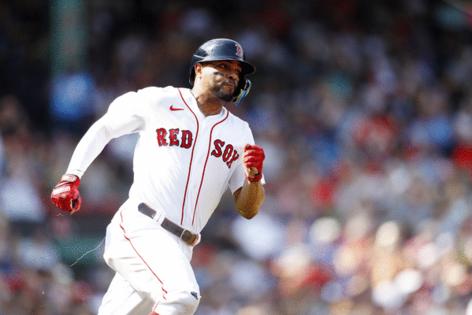 SAN DIEGO — The third try was the charm.

The Padres, who already had two shortstops, got their shortstop.

Shortly after the Winter Meetings ended, the team and free agent Xander Bogaerts reached an agreement on an 11-year, $280 million deal Wednesday night.

That came after the Padres' unsuccessful attempts to land shortstop Trea Turner on Monday and right fielder Aaron Judge on Tuesday.

Bogaerts will almost certainly play shortstop for the Padres in 2023 with Ha-Seong Kim moving over to second base and Fernando Tatis Jr. playing in the outfield when his suspension for a failed PED test is over April 20. This also presumably moves Jake Cronenworth to first base after he primarily played second base the past two seasons.

Since 2015, his .299 batting average ranks 11th in the major leagues while his .364 on-base percentage ranks 34th in that span. Those numbers lead all qualifying shortstops in that span, while his 33.9 bWAR trails only Carlos Correa (39.5) and Francisco Lindor (36.6).

The contract has no opt-outs and Bogaerts has a no-trade clause. The deal is the longest ever given to a player in his 30s.

The Padres engaged with Bogaerts' representatives last month but focused primarily on Turner, meeting with the former Nationals and Dodgers shortstop twice and offering him an 11-year, $342 million contract. After Turner chose to sign with the Phillies, a high-ranking Padres source said the team was no longer in the market for a shortstop.

But after meeting with Judge Tuesday night and learning Wednesday morning that he had decided to return to the Yankees, multiple Padres sources said the team was likely to continue to talking with Bogaerts.

Multiple reports Wednesday said Bogaerts' agents were negotiating with the Red Sox. Reports Wednesday night said Boston's offer was well short of what he will receive from the Padres.