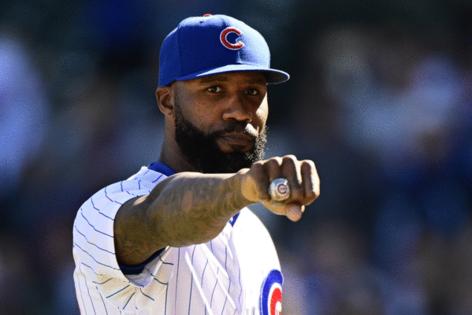 LOS ANGELES — Two days after the Chicago Cubs took a chance on former Dodgers outfielder Cody Bellinger, the Dodgers did the same with a former Cubs star trying to revitalize his career.

Jason Heyward signed with the Dodgers on Thursday, the team announced, agreeing to a minor league contract with an invitation to major league spring training.

It's about as low-risk of a move the Dodgers could have made in their effort to replace Bellinger.

Heyward, a 33-year-old former All-Star who signed an eight-year, $184 million contract with the Cubs in 2016, was released this offseason even though there was still one season and $22 million remaining on the deal.

Because the Cubs remain responsible for paying the remainder of that money, the Dodgers would only have to pay Heyward the league minimum salary of $720,000 if he were to make their major league roster this year — a situation similar to Albert Pujols' signing with the team in 2021.

Like Pujols then, Heyward will come to the Dodgers at a low point in his career.

While he was inconsistent during his early years in Chicago, the 13-year veteran reached new depths the past two seasons, when he batted .211 with a .606 on-base-plus-slugging percentage in 152 games.

After going on the injured list last June with right knee inflammation, Heyward didn't return to the field for the rest of the season. In mid-August, the Cubs announced they would release Heyward following the season, a move that became official last month.

Around the same time, the Dodgers parted ways with Bellinger, electing to let their longtime center fielder become a free agent rather than tender him a contract that likely would have paid him more than $18 million through the arbitration process.

On Tuesday, the Cubs scooped Bellinger up on a one-year, $17.5 million deal.

Back in Los Angeles, meanwhile, the Dodgers are hoping Heyward can help fill the void Bellinger's departure created in the outfield.

Heyward is a left-handed hitter, something the Dodgers were coveting in their search for more outfield depth. Heyward is also a plus-defender, a five-time Gold Glove winner in right field with experience playing center as well.

Still, to make the Dodgers roster, Heyward will have to earn a spot during spring training.

The team has outfielders Mookie Betts, Chris Taylor and Trayce Thompson returning from last season's team. The Dodgers are also high on prospect James Outman, who flashed his tantalizing power during a brief big league debut in 2022 but might not yet be ready for a full-time role in the majors.

It makes Heyward a low-cost insurance policy for a club that continues to exercise financial restraint in this year's exorbitant free-agent market.

They're hoping there is something left to squeeze out of the veteran outfielder's career. And if not, they will have wasted almost no resources finding out.