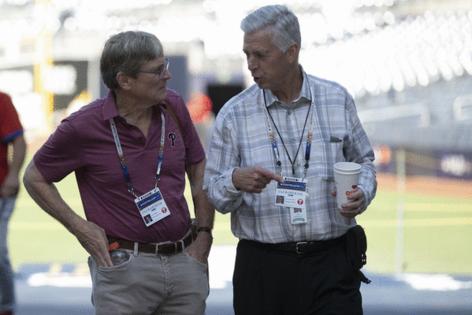 SAN DIEGO — As Dave Dombrowski packed his garment bag Wednesday and checked out of the Manchester Grand Hyatt, he might have considered borrowing a line from Michael Corleone near the end of The Godfather.

”Today, I settled all family business.”

Because when Dombrowski led the Phillies’ delegation of executives and scouts to the winter meetings this week, the National League champions had a list of offseason needs that included a shortstop, a middle-of-the-rotation starting pitcher, and help for the bullpen. And in a span of 32 hours — for a total of $387 million — they crossed off each item.

These meetings were supposed to be marked by Aaron Judge’s big decision, with the home-run king finally choosing between staying with the New York Yankees or going to play for his hometown San Francisco Giants. That answer finally came on Wednesday, the final day of the meetings, when Judge re-signed with the Yankees for $360 million.

But the Phillies dominated the meetings from start to finish. One month after their postseason thrill ride ended in Game 6 of the World Series, they made their intentions clear: They plan on making Red October an annual thing at Citizens Bank Park, and the next time they go deep in the playoffs, it won’t be such a surprise.

It was vintage Dombrowski, the star-hunting president of baseball operations who acts swiftly and decisively when he’s able to home in on a target at a specific position. It was classic John Middleton, the owner and former competitive wrestler who will spare virtually no expense in search of the two wins that separated the Phillies from the third World Series championship in their 140-year history.