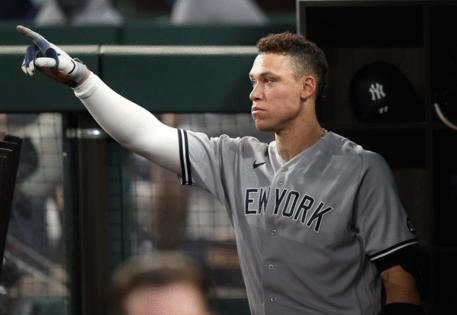 NEW YORK — The Yankees couldn’t let him go and Aaron Judge couldn’t walk away from the Bronx.

After a historic year, the slugger earned himself a huge contract from the Bombers. Judge and the Yankees agreed on a deal that will pay him $360 million over nine years, sources confirmed Wednesday morning.

That is $146.5 million more than the offer the Bombers had on the table on Opening Day, when Judge walked away angry with the team for having disclosed the deal. His feeling was the Yankees were trying to turn the fan base against him.

Still, Judge did not succumb to the pressure and bet on himself. He not only refused the extension offer, but also the Yankees’ 2022 contract offer and prepared himself to go to arbitration. The Yankees paid $2 million more than they wanted to avoid an ugly arbitration fight and are paying now.

Judge, who was also flirting with his hometown Giants during this free agent process, had a historic season, quieting doubts about his ability to stay healthy and putting up MVP-type numbers — while mostly playing center field.

He led the majors with 62 home runs and a 10.6 WAR, and was tied with the Mets’ Pete Alonso with 131 RBI. The 62 home runs broke a 61-year-old American League and Yankees’ single-season home run record. It is the seventh-most hit in a single season in baseball history.

The 30-year-old was clearly unhappy on Opening Day when after he had declined the Yankees’ eight-year extension offer — which including 2022 would have been worth $230 million — GM Brian Cashman came out and laid out the details of what he had walked away from.

“I don’t like talking numbers, I like to keep that private. It was something I kind of felt like was private between my team and the Yankees,” Judge said at the time. It was something that bothered him throughout the year, declining to comment on the process while he went out and had his greatest season.

Still, Judge has always made it clear, however, that he would like to play his entire career with the Yankees — if they are fair.

Last month when he won the American League Most Valuable Player award, he expressed how special playing here was to him.

“Getting the chance to wear the pinstripes and play right field at Yankee Stadium, it’s an incredible honor that I definitely didn’t take for granted at any point,” Judge said. “I always check myself pregame when I say a little prayer and I kind of look around the stadium and kind of pinch myself. There were very few individuals to get a chance to run out in that field and do that and play in front of the fans who have supported us throughout my whole six years here.

“So it was a special time you know, I just kicked myself for not bringing home that championship for them.”

Judge will get another chance at that now, but it was never going to be as simple as just re-signing him. He was unable to get them past the Astros in three trips to the American League Championship Series. The Yankees will now have to figure out a way to improve on the team with Judge’s monstrous contract along with huge chunks of payroll dedicated to Giancarlo Stanton and Gerrit Cole.

Judge has always been partial to the history and ceremony of the Yankees. Now, his history is intertwined with the club.

He debuted in 2016 with a home run in his first big-league at-bat, foreshadowing his time in pinstripes. He may have struggled the rest of that season, but in 2017 he left no doubts that he would be the leader of this team of homegrown “Baby Bombers.”

KANSAS CITY, Mo. — The Negro Leagues Baseball Museum is one of the best places to visit in Kansas City, because there is much to learn about the men and women who were part of that piece of U.S. history.

Bags and baskets and boxes, oh my.

Baseballs? Gobs of them. Same for ...Read More