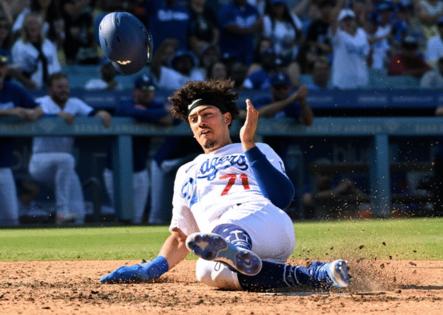 SAN DIEGO — The seed was planted in early November when Dodgers president Stan Kasten told The Times that “we think we are now on the precipice of the next wave of young guys” and that the team “needs to make room to allow that to happen.”

Does that mean a full-fledged youth movement is about to sprout amid the veteran core of a club built to contend for a World Series title every year? Probably not.

Andrew Friedman, the team’s president of baseball operations, admitted in November that there is some risk to adding too many prospects at once, and that the Dodgers “need to figure out the right way and the right timing to integrate some of these talented young players.”

Whether that infusion of youth is more trickle than wave, there are at least five highly touted prospects — pitchers Bobby Miller and Gavin Stone, infielders Miguel Vargas and Michael Busch and outfielder James Outman — who appear poised to contribute at some point in Chavez Ravine next season.

“I think it’s one of those groups that has a chance to be impactful going forward,” said Travis Barbary, who managed all five at triple-A Oklahoma City at various points of the 2022 season. “You don’t know how soon that impact is going to come, but it’s a very special group.”

Who has the most upside of the five? Who has the best chance to carve out a significant big league role in 2023? What are their strengths and weaknesses?

A closer look at the Dodgers’ Fab Five prospects with input from Barbary and two major league talent evaluators — we’ll call them Scout One and Scout Two — who are familiar with the upper levels of the Dodgers’ system and were granted anonymity to speak freely about the players.

Most scouts believe the Cuban native’s bat will play in the big leagues, and with few indications the Dodgers will bring back veteran third baseman Justin Turner, Vargas has the clearest path to substantial playing time next season.