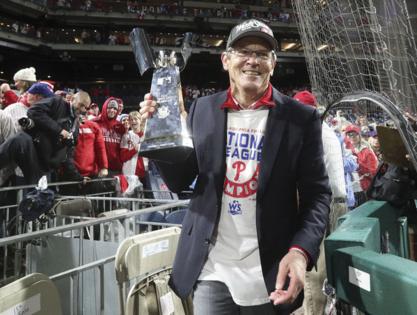 SAN DIEGO — Four years ago, John Middleton gassed up his private jet — the white Bombardier Challenger with a Phillies “P” on the tail — and flew to Las Vegas twice to meet with Bryce Harper and help close the largest deal in franchise history.

He wasn’t quite as hands-on when it came to the Phillies’ latest free-agent pursuit.

But as the talks got more serious with Trea Turner — the Phillies’ No. 1 choice over Carlos Correa, according to a source, in a shortstop market that also included Xander Bogaerts and Dansby Swanson — Middleton offered another reminder of why Jimmy Rollins once compared him to George Steinbrenner.

In a lunchtime (in Philadelphia) call Monday with team executives at the winter meetings at San Diego’s Manchester Grand Hyatt, the billionaire owner urged president of baseball operations Dave Dombrowski to be “reasonably, responsibly aggressive” in boosting an offer to Turner, especially because the Phillies were fairly certain that the Padres had made a better offer.

“We were at a number, they were at a bigger number, obviously, and I just finally said, ‘Look, Dave, do you believe this guy is a difference maker?’” Middleton said by phone Monday night. “He said, ‘John, he’s one of the 10 best players in baseball.’ And I said, ‘Well, what are we screwing around with this for?’”

The voice on the other end was undeniably Middleton’s. But the words? They were straight out of a Larry David impersonation.

Middleton has never minded the Steinbrenner comparison. The late Yankees owner was notorious for stopping at nothing to bring championships to the Bronx. And in the last five offseasons, with Middleton holding the checkbook, the Phillies have targeted and signed at least one marquee free agent to a nine-figure contract.