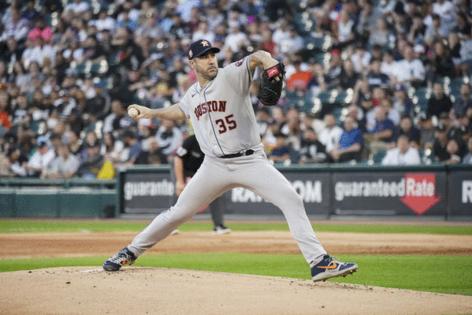 SAN DIEGO — The Mets have their ace.

Just one day into the winter meetings the Mets are reportedly in agreement on a two-year contract with right-hander Justin Verlander. According to ESPN’s Jeff Passan, the deal is for $86 million with a vesting option for a third year.

One of the most accomplished pitchers in baseball and a future Hall-of-Famer, Verlander has won three AL Cy Young Awards, an MVP and a rookie of the year and helped pitch the Houston Astros to two World Series wins and four AL pennants, as well as the Detroit Tigers to one AL pennant. He’s going into his age-40 season next year but he has shown no signs of slowing down, winning his third Cy Young Award in 2022 after returning from Tommy John surgery.

Verlander will replace Jacob deGrom, who signed a five-year contract with the Texas Rangers on Friday night in a surprise pre-winter meetings move.

This reunites Verlander with Max Scherzer, his former Tigers teammate. The duo have six Cy Young Awards between the two of them and are both signed through 2024 with an option for 2025. Having short-term, high AAV contracts at the top of the rotation mitigates some long-term risk.

The Mets have three pieces of their rotation in place with Scherzer, Verlander and Carlos Carrasco. They also have David Peterson, Tylor Megill and Joey Lucchessi, who are all capable of making starts, but the Mets are expected to be active in either the trade or free agent markets to acquire another mid-tier starter.

Verlander missed the 2021 season to rehab from Tommy John surgery but returned to the Astros to go 18-4 with a 1.75 ERA and a 2.49 FIP in 28 starts (175 innings pitched) and a 6.1 fWAR. It was the lowest single-season ERA of his career. He finished the season by helping the Astros win their second World Series title since 2017 and he finally earned his first career World Series win in Game 5 against the Philadelphia Phillies.

Verlander’s 78.1 career fWAR is the highest among all active players and ranks 24th overall.

A Manakin, Virginia native, Verlander was drafted first overall out of Old Dominion University by the Tigers in 2004. He has been one of baseball’s most consistent aces, having made 30 or more starts in a season 13 times and 28 or more twice over 17 seasons. Even prior to the elbow injury in 2021 he was still regularly throwing more than 200 innings per season.

In 35 career postseason appearances (34 starts) between the Astros and Tigers, he is 16-11 with a 3.64 ERA. The Mets feel postseason experience is important to a group that has only reached the playoffs once since 2016 and Verlander gives them another World Series winner who knows what it takes to pitch in meaningful games late in the season.