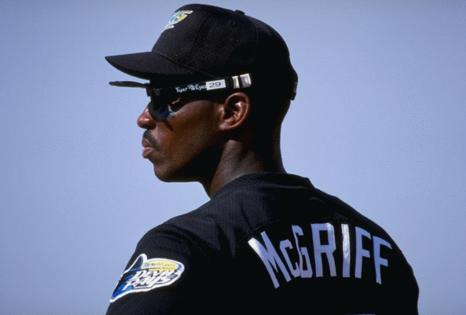 Fred McGriff is officially a Hall of Famer. The slugger was unanimously elected to the Class of 2023 by the Contemporary Era committee on Sunday night and was the only player selected. Former Yankee Don Mattingly fell four votes shy of the 12 out of 16 needed to get the nod to the Hall.

The controversial Red Sox and Diamondbacks pitcher Curt Schilling received seven votes. Barry Bonds, Roger Clemens and Rafael Palmiero, all of whom have been suspected of using performance enhancing drugs during their careers received less than four.

McGriff, 59, will be joined in the Hall of Fame Class of 2023 by any electees who emerge from the Baseball Writers’ Association of America voting, which will be announced on Tuesday, Jan. 24.

A five-time All Star and three-time Silver Slugger winner, McGriff played 19 seasons with the Blue Jays, Padres, Braves, Devil Rays, Cubs and Dodgers from 1986-2004. The first baseman reached the 30-homer mark in 10 seasons, becoming the first player in history to hit 30-or-more home runs with five different franchises. The 1994 All-Star Game MVP, McGriff won a World Series ring with the 1995 Braves. He totaled 493 home runs and had eight seasons where he posted at least 100 RBI. He finished in the top 10 of his league’s Most Valuable Player Award voting six times. McGriff won a league home run title twice — once in each the American and National League. He is just one of four players to win the home run title in both leagues. He had a career .377 career on-base percentage.

Mattingly, the former Yankee captain, is beloved in the Bronx and among the pinstriped faithful he seems an oversight by the Hall. He won an MVP and finished second in voting once, but the heart of his career lasted just four years. That is what kept him from receiving the writers’ vote.

Schilling’s 213 wins and 3.46 ERA were always borderline, but many thought his 11-2 record in the postseason should earn him a spot. Only former Cardinal great Bob Gibson had a postseason resume as impressive as Schilling.

The politically conservative and outspoken pitcher said he was snubbed by the BBWAA writers for a Hall of Fame nod because of his comments on politics and journalists.

Bonds was a seven-time MVP who is still the sport’s all-time and single-season home run leader, but his close association with PED dealers has cost him in the eyes of voters. Likewise Clemens is a seven-time Cy Young winner whose record has been marred by PED suspicions.

Unlike the BBWAA vote by hundreds of writers, the Veterans Committee meets and talks through the candidates. This year’s committee, the contemporary Era committee, was composed of Hall of Famers Chipper Jones, Greg Maddux, Jack Morris, Ryne Sandberg, Lee Smith, Frank Thomas and Alan Trammell. Also on the committee this year were executives Paul Beeston, Theo Epstein, Arte Moreno, Kim Ng, Dave St. Peter and Kenny Williams. The three media representatives were Steve Hirdt, LaVelle Neal, Susan Slusser. The Contemporary Era is for players whose greatest contributions came from 1988 to 2016.

It’s a way the Hall created to reexamine the cases of players who failed to get the 75% vote required to get in via the BBWAA vote. The candidates needed 12 of the 16 votes to get in and the committee could elect up to three players.