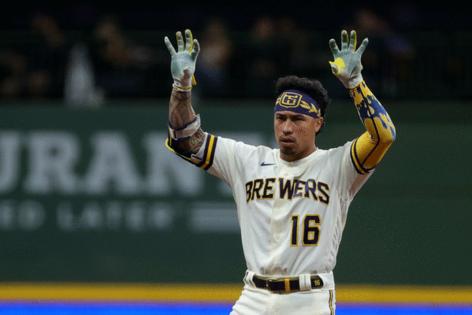 The biggest ticket of them all, outfielder Aaron Judge, was realistically above the Mariners' pay grade from the start. The team has no need to dip into the crop of elite starting pitchers available in free agency, given their deep rotation and pool of young prospects knocking on the door.

And now, with second baseman Kolten Wong's acquisition to fill the team's middle-infield vacancy, it seems to close the door on the elite free agent shortstops, any one of whom would have fit so well onto Seattle's roster. Of course, I'm talking about Carlos Correa, Xander Bogaerts, Trea Turner and Dansby Swanson.

If so, it means for the second year in a row, the Mariners will come up empty on a position loaded with free-agent talent that fit perfectly into their needs, at least on paper. Once again, Dipoto came out firmly from the start with the stance that the Mariners' strong preference was to leave J.P. Crawford at shortstop and convince one of those shortstops to move to second base. It's a curious (and dubious) stance — unless you've already become convinced that none of the current crop of shortstops is inclined to give Seattle serious consideration. Or that you don't want to pay the huge dollars required to make it happen (from $150 million all the way up into the $300 million for Correa, most likely).

"I don't think the second-base/shortstop thing really had anything to do with this move, or a lack of traction with those players in particular," Mariners general manager Justin Hollander said Friday. "And I think Jerry hit on this: For the right player, we would have considered anything. We felt like this was the best thing that we can do for our team right now."

In that context, the trade for Wong is another savvy one for Dipoto and Hollander, on the heels of their acquisition of slugging outfielder Teoscar Hernandez on Nov. 16. It fills the Mariners' middle-infield need with a solid player whom they've long coveted, and it gives them a necessary left-handed bat for their lineup. Wong is coming off his best offensive year from an OPS-plus standpoint (118), though on the negative side his defensive numbers fell alarmingly, he's a little long in the tooth at 32 and can be a free agent after the season.

Nevertheless, Wong should be an upgrade over the departed Adam Frazier. (Unless, of course, he suffers the same "National League to American League blues" that Frazier and Jesse Winker did.)

It was a trade that cleaned up two misses by the Mariners in previous transactions. They are sending Milwaukee Winker, who was a huge disappointment last season, offensively, defensively and chemistry wise, after being acquired from Cincinnati during spring training (the "throw-in" from the trade, Eugenio Suarez, turned the deal into a net positive).

Also going to the Brewers is infielder Abraham Toro, whom the Mariners felt had great untapped potential when they got him from the Astros in a massively ill-timed trade that cost them relievers Kendall Graveman and Rafael Montero. Toro, a 25-year-old switch-hitter, never tapped that potential, hitting a combined .213/.276/.342 in his year-plus with Seattle.

There is some risk of a bounce-back from Winker in his more familiar NL Central, and of a breakout by Toro, who showed intermittent flashes of the form that intrigued the Mariners in the first place. But in terms of incrementally strengthening the Mariners for 2023, it's a good deal.

The question of whether the Mariners are going "all-in" for next season to a suitable degree, in light of their success in 2022, is a valid one. They ended the drought last year, won a playoff series, and gave the eventual champion Astros their toughest battle of the postseason. The overriding goal this offseason should be augmenting the roster so they can take the next step, or even the one after that into the World Series.

That's still possible, even without the splashier names. It's not about winning the winter news conference; it's about overall improvement, and the Mariners have made two important steps in that regard. Speaking on Seattle Sports 710 AM this week, Dipoto pointed out that the Mariners have more obligations in 2024 and beyond than all but two teams, by virtue of their core of young talent that will hit arbitration, the substantial contract extensions given Julio Rodriguez, Luis Castillo and Crawford, and the Robbie Ray contract.

Like it or not, that plays into payroll considerations when it comes to long-term contracts. So does the possibility (probability?) that the Mariners are girding for a full-bore pursuit of Shohei Ohtani if and when he becomes a free agent after the 2023 season. They missed on Ohtani once but could be highly attractive to the two-way unicorn this time around.

Meanwhile, entering next week's winter meetings, the Mariners still have a need for a corner outfielder/DH type player for next season who could be a significant addition to their lineup. The in-house candidates are Jarred Kelenic, Sam Haggerty and Taylor Trammell, but the Mariners are liable to go any number of ways here.

There's the potential for a big trade; you can always count on Dipoto to make one move each winter no one saw coming. Free agent Brandon Nimmo is intriguing, though much of his value is predicated on playing center field, the position Rodriguez has locked down. They could also sign a high-upside, bounce-back candidate such as Michael Conforto or Cody Bellinger to a one-year "pillow" deal.

The Mariners definitely got better Friday with Kolten Wong's arrival. With the attainable goals of increased postseason success next year and beyond, the onus is still on them to keep doing so.