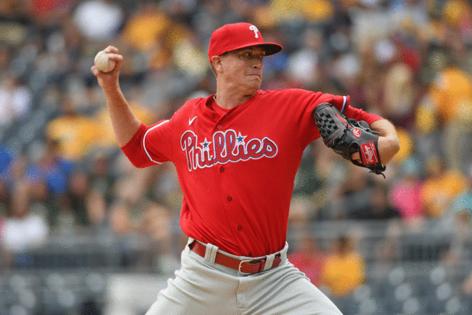 BALTIMORE — The Orioles have supplied their rotation with a veteran presence for 2023, agreeing to terms with right-hander Kyle Gibson on a one-year contract, according to multiple reports. ESPN and The Athletic reported the deal is pending a physical.

Gibson, 35, has made 25 or more starts in every full season since 2014, pitching for the Minnesota Twins, Texas Rangers and Philadelphia Phillies. In 31 starts across 167 2/3 innings for the National League champion Phillies in 2022, Gibson posted a 5.05 ERA before making two scoreless relief appearances during the postseason. An All-Star for Texas in 2021, Gibson has three seasons in which he made at least 30 starts with an ERA of 3.84 or lower. He’s coming off a three-year, $28 million agreement with the Rangers signed after the 2019 season.

Executive vice president and general manager Mike Elias has cited the organization’s difficulty in signing free-agent pitchers to one-year deals as part of its incentive for moving back Camden Yards’ left field wall last offseason. Gibson allowed 24 home runs in 2022, tying his career high, but only 18 of them would have left Oriole Park, tied for his third fewest at any ballpark according to Baseball Savant.

He posted an above-average walk percentage and chase rate, though he was below average in generating strikeouts and whiffs. A six-pitch pitcher in 2022, Gibson used his sinker most often, also deploying a cutter and four-seamer. His change-up and his slider were his two best pitches by expected weighted on-base average — an advanced metric based on quality of contact and how batters reached base — while his curveball, his least-used pitch, was his worst.

Although the Orioles are expected to continue to seek upgrades for their rotation this offseason, Gibson joins an otherwise inexperienced group. With top starter John Means not expected to return from Tommy John elbow reconstruction surgery until midseason, Baltimore was otherwise relying on a group of starters who had varying stretches of success in 2022 but lack extended major league experience.

Jordan Lyles led the club with 179 innings in 2022, but the Orioles elected to pay him a $1 million buyout instead of picking up an $11 million club option. Baltimore’s agreement would seem to make a new agreement with Lyles unlikely, though the club planned to keep in touch with him after declining the option. Signing Gibson is perhaps in hope he can outperform Lyles’ 4.42 ERA, though Lyles was also heavily credited for his leadership of a young pitching staff.

Dean Kremer’s 125 1/3 innings in 2022 lead the Orioles’ returning pitchers. Kremer posted an impressive 3.23 ERA, bouncing back from a disastrous 2021 rookie season. Kyle Bradish experienced his own first-year struggles, going on the injured list in June with a 7.38 ERA, but he had a 3.28 mark over his final 13 starts, two of which were scoreless outings of at least eight innings against the eventual World Series champion Houston Astros. Tyler Wells, Austin Voth, Spenser Watkins and Bruce Zimmermann also experienced ups and downs while in Baltimore’s rotation, and each remains on the club’s 40-man roster. None have made more than 23 major league starts in a season.

Right-hander Grayson Rodriguez and left-hander DL Hall, the Orioles’ top two pitching prospects, are also expected to contend for starting spots come spring training. A Grade 2 right lat muscle strain prevented Rodriguez, regarded as the best pitching prospect in the sport, from making his debut in 2022, while Hall made only one start for Baltimore before moving into a relief role to manage his innings.

The Orioles still have yet to sign a free agent to a guaranteed multi-year deal during Elias’ four-year tenure, and adding a significant rotation piece beyond Gibson might require them to do so. The top remaining starters on the market are Justin Verlander and Carlos Rodón, while Baltimore might be more likely to pursue the next tier of pitchers including Chris Bassitt, Kodai Senga and Jameson Taillon. The club virtually met with right-hander Noah Syndergaard on Friday, according to the New York Post. Once Gibson is officially signed, Baltimore will have two open 40-man roster spots.

The Athletic first reported the Orioles’ agreement with Gibson.