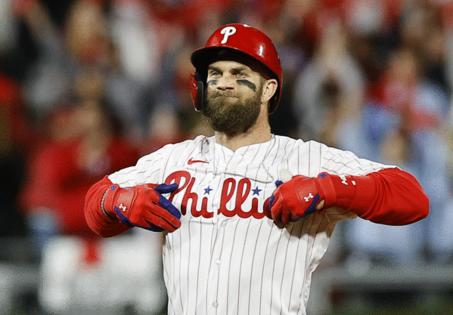 In a tightly worded news release issued on Thanksgiving eve, the Phillies announced that the face of the franchise will be back in the lineup, initially as the designated hitter, “by the All-Star break of 2023.” More than a week later, we’re still pondering the ambiguity of that statement.

The All-Star break isn’t until July 10-13. By then, the Phillies will have played 90 games. Is Harper really going to miss more than half the season? Or is this a classic case of underpromising with the hope of overdelivering? If the two-time MVP returns on the Fourth of July, or June 15, or June 1, wouldn’t that still qualify as “by the All-Star break?”

So, yes, if the Phillies’ timetable seems vague and perhaps even a bit conservative, it’s by design. Because although Harper is said to be optimistic about making it back much sooner than the middle of July, pinpointing when he will be recovered from the procedure that is commonly known as “Tommy John surgery” is an inexact science. Even for the medical community.

“The rehabilitation is going to, I would think, begin at four months when it comes to the higher-level activity, but it’s going to progress at its own rate, its own intensity,” said David L. Glaser, an orthopedic surgeon and chief of the shoulder and elbow division at Penn Medicine who has not treated Harper. “The reality is — and I don’t know what other damage he had within the elbow — he’s an elite athlete, and elite athletes tend to heal well.”

This much is clear: Position players, especially outfielders, come back from Tommy John surgery in about half the time as pitchers, who typically require 12 to 18 months. That’s cause for the Phillies to be hopeful — and not to feel panicked into altering their offseason plan, which centers on signing a star free-agent shortstop and adding depth to the starting rotation and the bullpen.

But this is also true: Few outfielders have actually gone through this.

Of the 2,218 instances of Tommy John surgery tracked by baseball writer/analyst Jon Roegele, only 71 (3.2%) were performed on outfielders, notably Aaron Hicks, Carl Crawford, Shin-Soo Choo, Rocco Baldelli, Luis Gonzalez, Matt Holliday, Jay Buhner, José Canseco, and Mike Greenwell. And most had it done during or immediately after a season, according to Rogele’s exhaustive research, giving them ample time to recover before spring training. Harper, by virtue of the Phillies’ playing until Game 6 of the World Series, won’t have that luxury.

But Harper will enjoy one advantage. He can come back as a DH, which was finally incorporated by the National League this year. And since hitting doesn’t affect the torn/newly reconstructed ulnar collateral ligament nearly as much as throwing does — Glaser called it “a completely different mechanism” — it may get him into the lineup faster.