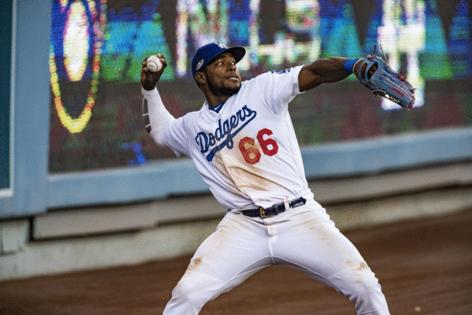 LOS ANGELES — Former Dodgers star Yasiel Puig has withdrawn from an agreement to plead guilty to a charge of lying to federal investigators in a sports betting probe and has changed his plea to not guilty, his representatives said Wednesday.

"I want to clear my name," Puig said in a statement. "I never should have agreed to plead guilty to a crime I did not commit."

Under the plea agreement, Puig would have been eligible for probation and had agreed to pay a fine of at least $55,000. Without the agreement, Puig could face trial and a maximum sentence of five years in prison.

Puig's attorney, Keri Axel, said in a statement that "significant new evidence" prompted the change in plea. Axel did not say in the statement what that new evidence might be, and she told The Los Angeles Times through a spokesman: "We are prepared to publicly share that information in the appropriate forum and at the appropriate time."

However, in a court hearing last week, she suggested that messages left for Puig by an agent and his associate raised the possibility that Puig might have been entrapped.

Assistant U.S. Attorney Jeff Mitchell, one of two prosecutors working on the case, has said prosecutors have made their evidence available to Puig's defense team.

Of the Zoom interview in which Puig is alleged to have lied to investigators, Axel said: "Mr. Puig, who has a third-grade education, had untreated mental-health issues, and did not have his own interpreter or criminal legal counsel with him."

The government alleges Puig lied when he said he had never discussed betting with the unnamed agent, described in the plea deal only as "a former collegiate baseball player and private baseball coach." In fact, the government alleged, Puig had lost $282,900 on sports bets placed with that agent in the first half of 2019.

In the second half of 2019, the government alleges, Puig made "899 bets on tennis, football, and basketball games" through an offshore website. There is no evidence in the plea agreement that Puig, who played for the Cincinnati Reds and Cleveland Indians in 2019 and now plays in South Korea, bet on baseball.