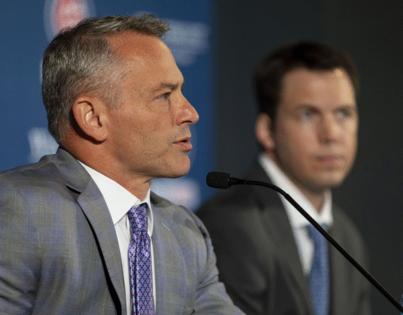 Not to put any pressure on team President Jed Hoyer — who was then serving as general manager and best supporting actor to Theo Epstein — but it’s time to put his own stamp on a winter meeting.

An “intelligent” spending spree may be Hoyer’s preferred course of action over a big-ticket item, but we’ll have to wait to see. The teams, media members, agents, honchos and wannabe honchos begin congregating Dec. 4 at a downtown Hyatt Hotel, with the meetings starting the next day and running through Dec. 8.

By that point we should have a good idea of where Hoyer is headed, even if nothing is announced.

The winter meetings are something of an anachronism in the smartphone era. Last year teams spent about $1.7 billion on free agents before the Dec. 1 lockout by owners, knowing signings would be prohibited for at least a couple of months. The pre-deadline movement suggested big deals can get done without clandestine meetings in hotel suites stocked with liquor and salty snacks.

We were robbed of a true Hot Stove League last winter. The winter meetings were held last December in Orlando, Fla., but MLB bowed out and left it for the minor leagues. This could be a return to an old-fashioned, pre-pandemic doozy of a winter meeting. Teams have thus far declined to jump cannonball-style into the free-agent waters, potentially saving their heavy lifting for San Diego.

Modern executives don’t even try to live up to the old standard set by late GM Kevin Towers, who didn’t mind conducting business at the hotel bar with a glass of whiskey, a cocktail napkin and a handshake.

It was a different time. Former Cubs GM Jim Hendry once signed pitcher Ted Lilly to a four-year, $40 million deal during the 2006 meetings in Orlando after being taken to a hospital with chest pains.

“Jim was hooked up to an EKG machine, and we got it done,” Lilly’s agent, Larry O’Brien, announced that day.

The Cubs spent nearly $300 million that winter, nearly doubling the next highest-spending team, the Boston Red Sox, then run by Epstein. Now you can offer $300 million to one free agent and still come up short.