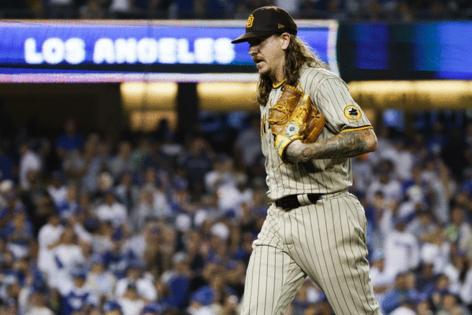 The Chicago White Sox may be turning to a familiar foe to fill an opening in their rotation, reportedly agreeing to a contract with free-agent starter Mike Clevinger.

Financial terms of the deal were not disclosed in the report Sunday by Ken Rosenthal of The Athletic. MLB Network’s Jon Morosi reported the contract is for one guaranteed year, and the agreement is pending a physical, Rosenthal reported.

Clevinger spent parts of five seasons in Cleveland before being traded to the San Diego Padres in 2020.

He was dealt to the Padres in August 2020 and was diagnosed with a right posterior elbow impingement after his final regular-season start. He pitched a scoreless inning in a start against the Los Angeles Dodgers in the National League Division Series but exited after the first and underwent Tommy John surgery that November.

He joins a rotation that includes Dylan Cease, Lance Lynn, Lucas Giolito and Michael Kopech. The Sox had an opening with Johnny Cueto becoming a free agent.

Clevinger is 5-2 with a 2.15 ERA in 11 career appearances (nine starts) against the Sox. He has a 3.13 ERA in four career starts at Guaranteed Rate Field.

He also has postseason experience, including pitching in relief during three games of the 2016 World Series against the Cubs.

He made two starts during the 2022 playoffs, one against the Dodgers in the NLDS and another against the Philadelphia Phillies in the NL Championship Series. He failed to record an out while allowing three runs against the Phillies. Overall, he has a 7.47 ERA in 10 postseason appearances (four starts).

Now he’ll look to help the Sox return to the playoffs after the team’s disappointing 2022.