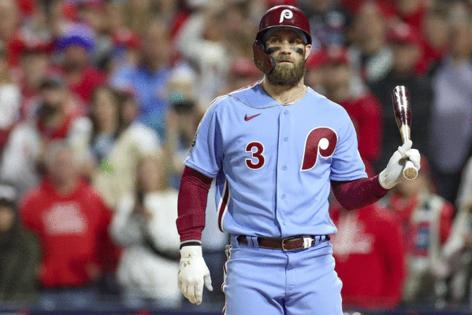 PHILADELPHIA — The news that the Phillies are planning to be without Bryce Harper until after the All-Star Break brings some clarity and some confusion to their offseason.

The clarity lies in what we’ve seen so far. Dave Dombrowski has likely known for a long time that there was a strong chance he’d be without his MVP for a big chunk of the 2023 season. Surely, it was in the back of his mind when he acquired lefty center fielder Brandon Marsh at the trade deadline. And it was probably at the forefront of his thinking when he began to consider making a play for one of the four star shortstops on the free-agent market.

After all, the best way to replace the loss of an elite hitter at one position is often to add an elite hitter at another position. Of course, Harper is a hitter who shares a zip code with maybe three or four other players. Which means there may not be a viable solution for replacing the entirety of his production.

The big conundrum is the length of time Harper is expected to miss after undergoing Tommy John surgery this week. The Phillies say they hope to have him back in the lineup after the All-Star Break. That’s a similar timeline to the one that Angels two-way star Shohei Otani followed after similar surgery in 2018. He was back on the field 31 weeks after the procedure. In Harper’s case, that would equate to the last week of June. The Phillies play their 81st game on June 29, so even if Harper does get himself back before the mid-July All-Star break, he’ll almost certainly miss half of their schedule.

That’s a long enough time to warrant Dombrowski spending some resources on a replacement. Problem is, he’d need to find a spot for that replacement once Harper returns. Which is part of the reason a big ticket shortstop would make so much sense.

If the Phillies were to land a significant upgrade over Jean Segura, whose club option they declined, it would help them replace the production they are losing from Harper and also keep that production in the lineup once he is back.

One thing a big ticket shortstop won’t do is hit from the left side of the plate. Xander Bogaerts, Trea Turner, Carlos Correa, Dansby Swanson — all are right-handed hitters. That’s something Dombrowski will need to consider given that his lineup already includes righties J.T. Realmuto, Rhys Hoskins, Nick Castellanos and Alec Bohm. But there may not be much of a solution.

It doesn’t make much sense for the Phillies to spend significant money or prospects to acquire a left-handed hitter. And it could be difficult to persuade a low-cost, high-reward player to sign in a situation where he could struggle to find at-bats during the second half of the season. Simply put, any of the options the Phillies could obtain may not be nearly as good an option as the ones the Phillies already have.

And they do have a couple.

Take someone like Darick Hall. Last season, the 27-year-old slugger finished fourth on the team with an .877 OPS against right-handed pitching. Hall hit nine home runs in 130 plate appearances against righties. To put that into perspective, Castellanos hit 11 home runs in 428 plate appearances. Sure, in an ideal world, you’d have a left-handed hitting outfielder who would give Rob Thomson an additional option against righties should Castellanos’ struggles continue. But, then, the Phillies will have bigger problems if Castellanos has another year like 2022.

Therein lies the most reasonable takeaway to Harper’s injury. The things that the Phillies need to repeat as National League champs are the same things that they need to survive three months without Harper. They need Castellanos to give them production in line with his $20 million salary. They need Ranger Suarez to be the guy he was after the All-Star break. They need at least one more starter who is better than replacement level. And they need a bullpen to be a strength instead of a liability.

If the Phillies get all of that, plus a shortstop like Bogaerts or Turner, then a half season of Harper should be more than enough to make the postseason. And, as we know, all bets are off from there.