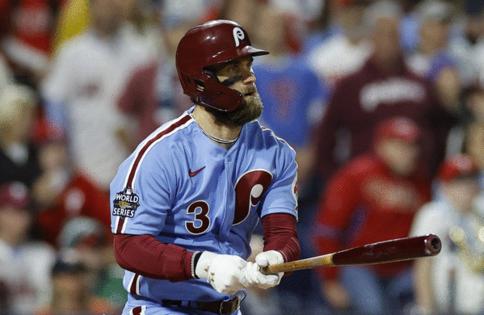 PHILADELPHIA — Phillies designated hitter Bryce Harper underwent “successful” Tommy John surgery with Dr. Neal ElAttrache in Los Angeles on Wednesday, according to a team press release. In the release, the Phillies said that Harper is expected to return as designated hitter by the 2023 All-Star break, and could return in right field towards the end of the regular season.

Phillies president of baseball operations Dave Dombrowski said last week that Harper would undergo surgery on his right elbow, but said the team was unsure of what the extent of the surgery would be. At the time, it was possible that Harper would require only a repair of his damaged ulnar collateral ligament, a procedure called an internal brace that his teammate, Rhys Hoskins, had in 2020.

But upon further examination on Wednesday, Dr. ElAttrache decided that Harper needed a full reconstruction of his UCL, termed a “right elbow UCL reconstruction/repair with ulnar nerve transposition” by the Phillies.

While it was unclear exactly when Harper was hurt, he has been dealing with an “achy” feeling in his elbow since April, after a throw to home plate on April 11 that caused him to wince in pain. Harper played four games in right-field following that game, but was then shut down from throwing for a week on April 18.

At the time, then-manager Joe Girardi said Harper was dealing with tendinitis, but an MRI revealed a strain in his flexor mass (a group of muscles and tendons in the forearm), the team said. Harper has not played a game in right field since April 16 but quickly transitioned to his role as DH, as hitting did not put stress on the elbow injury.

After he was hit by a pitch that broke his thumb on June 25, Harper found himself back in a big league lineup almost exactly two months later. It took him a while to find his timing at the plate, but once he did, he looked like he was fully back to his 2021 National League MVP self. Post thumb-injury, Harper found his stride at the best possible time for the Phillies — during the 2022 postseason, when he hit .349/.414/.746 with a 1.160 OPS.

Harper was hitting .318/.386/.599 over 64 games before he got hit by a pitch on June 25. That type of production won’t be easy for the Phillies to replicate for the first two months — or more — of the 2023 season, but they now have the benefit of knowing a rough time frame for Harper’s absence, which could inform some of their decisions this offseason.

Last week, Dombrowski emphasized that the Phillies have several candidates on their roster who could fill in for Harper if need be. In 2022, that player was largely Darick Hall, a rookie power hitter who was used as a DH against right-handed pitchers. Hall came out of the gate strong, hitting two home runs in his second big league game on June 30 and posting a .907 OPS over his first 12 games, and heated up again in August, when he hit .302/.333/.628 over 13 games, but he finished his first season in the big leagues with a glaringly high strikeout rate of 31%.

“Jean [Segura, a free agent,] is not back with us at this point,” Dombrowski said last week. “We have some flexibility to look at what the middle infield situation would be. So we have some different things — so I think fit all of those things together and see what you think makes your best club.

“But we do have some people that we like. Sometimes best-made plans go for naught. When we originally signed [Kyle] Schwarber and [Nick] Castellanos, the idea was that one of them would be our DH the majority of our time and one would play in the outfield. Well, they both played in the outfield. So it does open up the position, if you could have some flexibility on who you DH for a short time period.

“We like what Darick Hall did for us. We like Darick Hall. Do we think that using him in a role, depending on the time, compared to other moves we may make, gives us the best chance to win? We’ll just have to wait and see.”

Another option that was mentioned last week by manager Rob Thomson would to be move utility man Edmundo Sosa to third base, third baseman Alec Bohm to first base, and first baseman Rhys Hoskins from first base to DH. This would presume the Phillies acquire a shortstop this offseason, preferably one they can slot into the middle of the lineup.

Vierling posted a defensive runs saved (DRS) and outs above average (OAA) of zero in 146 2/3 innings played in left field in 2022, and a DRS and OAA of one in 175 innings played in right field in 2022. Under this theory, Brandon Marsh would get more regular playing time in center field, where he grades well defensively. The left-handed Marsh was platooning the position with Vierling in 2022, often facing right-handed hitters. His left-handed splits will need some work the Phillies intend for him to become a full-time center fielder (he hit .188/.226/.260 against left-handed pitchers in 96 at-bats this year).

In short, Harper’s injury will surely have ripple effects, but it should allow for some defensive flexibility.

“You don’t ever want to lose Bryce,” Thomson said. “He’s one of the best hitters in baseball, if not the best. But we spent a lot of time last year without him and guys responded, and it gave opportunities to other people to step up and they did. So, while we will be missing him and looking forward to getting him back, it’ll give somebody else an opportunity.”