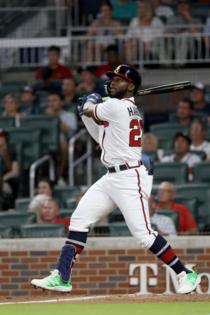 “Mike, stop,” the dad would say after his son would keep hurling the ball around the house.

Young Michael would keep throwing it. He was quiet, so this was his way of asking to play.

“OK, let’s go outside,” his father would say.

The work, which has since paid off, started there. Years passed.

On a day this May, the young Harris walked into Truist Park for the first time, marveling at all he saw as his dreams came true. Months later, the story has become even more heartwarming for the Stockbridge High graduate.

Harris, an Atlanta-area native and lifelong Braves fan, won National League Rookie of the Year for his outstanding 2022 season for his hometown team. The center fielder finished ahead of teammate Spencer Strider (second place) and St. Louis’ Brendan Donovan (third) in voting conducted by members of the Baseball Writers’ Association of America at the end of the regular season.

David Justice, the 1990 NL Rookie of the Year for the Braves, announced the winner on live television.

“It was kind of crazy,” Harris said of finding out on TV (like the rest of us) that he won the award. “I was just waiting for them to say a name. I was kind of expecting Spencer. … It was kind of surprising just to hear my name after coming up in the middle of the season and just trying to do what I could to help the team win. I didn’t really expect this at the beginning of the year. When I came up, I just tried to come up and do my job, and to end the season and get this award, it means a lot.”

Harris received 134 total voting points, and Strider earned 103. Harris received 22 of 30 first-place votes. This marks the fourth time teammates finished Nos. 1 and 2 in voting for this award, and the first time since 2011, when Craig Kimbrel (first place) and Freddie Freeman (second) did it.