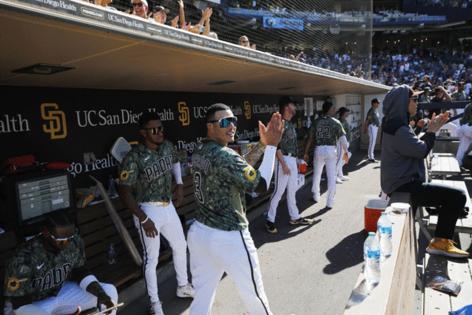 As they came to bat in the seventh inning Sunday at Petco Park, in what ended up a 2-1 loss to the White Sox, the Padres were guaranteed a playoff berth by virtue of the Brewers losing in 12 innings to the Marlins in Milwaukee.

Josh Bell was batting at the start of the seventh when the Marlins' 4-3 victory went final, and thousands among the sellout crowd began to stand and cheer. Some Padres players and staff were in the clubhouse watching the game. A few who were standing in the dugout briefly clapped.

When the inning was over, the Petco Park video boards lit up with notification the Padres had clinched the postseason and public address announcer Alex Miniak announced the berth as the crowd cheered louder and longer.

After the game's final out, fireworks rocketed into the sky as players received commemorative T-shirts (with the slogan "October Rise") and hats outside the dugout.

As team personnel exchanged hugs and high-fives on the field, many fans stayed standing and cheering near their seats.

That was about the only excitement inside Petco Park on Sunday.

The Padres scored their lone run on Ha-Seong Kim's homer in the seventh inning and otherwise hardly threatened in front of the lively sellout crowd that from the start seemed primed to witness a rarity.

This is just the seventh time in the franchise's 54 seasons that the Padres will participate in the postseason. They went to the playoffs in 2020, following a season that was shortened to 60 games in the early stages of the COVID pandemic. They clinched in a virtually empty ballpark, as fans were not allowed at games that year.