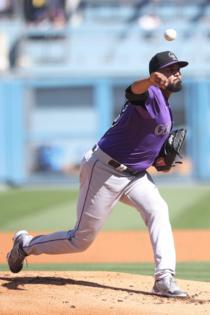 They got it, 4-1 by riding an excellent start by German Marquez, timely hits, and a two-inning save by closer Daniel Bard.

Colorado snapped a season-high seven-game losing streak and won for the first time at Dodger Stadium in six tries. Bard slammed the door by striking out six en route to his 33rd save.

Marquez, in his final start of the season, was tremendous. He gave up one run on just one hit and struck out eight over six innings. He did walk three, which could have been problematic, but he was able to avert major trouble.

Dodgers left-hander Tyler Anderson, the former Rockie, struck out 10 in just five innings, but the Rockies did just enough to hurt him. Brendan Rodgers hit a one-out homer to center field in the first inning, Rodgers’ first homer since Aug. 11 vs. St. Louis, snapping a streak of 103 at-bats without a long ball.

Colorado took a 2-0 lead in the third, combining a single by Yonathan Daza and an RBI double by Ryan McMahon.

L.A. scored its lone run against Marquez in the third. Gavin Lux drew a leadoff walk, sprinted to third on Trayce Thompson’s single to shallow right, and scored on Cody Bellinger’s sacrifice fly.

The Rockies scored two insurance runs in the ninth off of right-hander Andre Jackson, capitalizing on an error by right fielder Joey Gallo (who lost the ball in the sun) that allowed Randal Grichuk to reach third, followed by an RBI double by Sean Bouchard and an RBI single by rookie shortstop Ezequiel Tovar. It was Tovar’s first RBI of his big-league career.

SEATTLE — Gaylord Perry used to call the spitball "my survival pitch," and by the time he got to Seattle in 1982 — barely hanging on at 43 years old, 21 years into his career — survival was his preeminent goal.