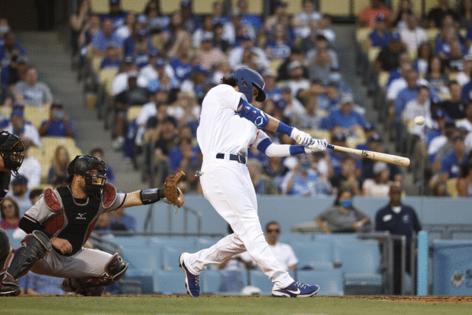 LOS ANGELES — How joyful. How fitting. With the Los Angeles Dodgers already having achieved nearly every conceivable regular-season goal — and adding victory No. 110 by the end of the night — Saturday provided an opportunity to honor a broadcaster employed by the franchise for 64 years and a player in his first Dodgers season.

Jaime Jarrin, the Dodgers Hall-of-Fame Spanish-language broadcaster since 1959, was the subject of an emotional, lengthy pregame ceremony at Dodger Stadium. Jarrin, 86, will retire at the end of the season, and his immense popularity throughout baseball and the Dodgers fan base was celebrated.

Fellow broadcasters, politicians, and actor-activist Edward James Olmos took turns saluting Jarrin in person and via video, conveying their affection for his six-plus decades of warmth, dignity and professionalism. Yasiel Puig even sent a dispatch from South Korea, where he is now playing.

Baseball Hall of Fame president Josh Rawitch was on hand to request Jarrin’s headset to display in Cooperstown. Jarrin said, of course, but let’s wait until after the playoffs.

Freddie Freeman, leading the National League in several offensive categories, won something that transcends his potent bat — the Roy Campanella Award, voted upon annually by Dodgers uniformed personnel to the player who best exemplifies the spirit and leadership of the late Hall of Fame catcher.

Freeman drove in the Dodgers’ first run in a 6-4 win over the Colorado Rockies, his 98th RBI of the season. He also drew the second of five consecutive walks in the seventh and scored when the Dodgers came back from a 4-1 deficit to tie the score, and singled and scored in the eighth when the Dodgers took the lead. Brusdar Graterol pitched the ninth for his fourth save.

Freeman has said multiple times that his statistical goals are to bat .300, score 100 runs, drive in 100 runs, and post an on-base-plus slugging percentage of .900. He’s well on his way, leading the National League with a .329 batting average while ranking second with a .925 OPS and 115 runs. He leads the NL with a .412 on-base percentage and all of baseball with 46 doubles and 196 hits.

Manager Dave Roberts announced to the team that Freeman was the recipient of the Campanella Award while noting that several other Dodgers also received votes. Freeman, in his first year after signing a six-year contract during the offseason, employs a blue-collar work ethic to generate upper-crust results.

“You layer in the performance, the character, making people around you better, being a leader, holding people accountable when needed, and showing up for work every day,” Roberts said on why Freeman deserved the award. “It’s refreshing to see a guy who says, ‘My job is to play.’ … It’s a breath of fresh air, and that flows over into our clubhouse.”

Roberts mentioned utility infielder Hanser Alberto as another first-year Dodger who garnered votes for the Campanella Award because his presence has been felt in a unique way.

“Hanser knows his role, he has so much gratitude for putting on this Dodger uniform every night, being ready when called upon,” Roberts said. “And he does add a lot of joy and fun to the clubhouse.”

The fun didn’t extend to the field early on. Dodgers rookie Michael Grove gave up two home runs in the fourth inning — including a three-run shot by Randy Grichuk — and departed after taking a ground ball off his foot to end the fifth inning with the Dodgers trailing 4-1.

A night after amassing 10 runs and 15 hits against the Rockies, Dodgers bats were quiet even during their seventh-inning rally. Mookie Betts had the only extra-base hit, a milestone double that made him only the second Dodger to amass 40 doubles and 35 home runs in a season. Babe Herman accomplished the feat in 1930.

Short hops: The Dodgers lineup changed twice before the game. Originally, Roberts had Justin Turner returning after sitting out Friday because of a left leg contusion. But Turner asked him for another day off and Roberts obliged, inserting Gavin Lux to play second base and moving Alberto from second to third. The next change came when left fielder Chris Taylor, who had three hits Friday and was going to bat cleanup, reported neck tightness. Trayce Thompson was bumped up to cleanup and moved from center field to left with Cody Bellinger batting seventh and playing center. . . . The starting rotation is set for the rest of the regular season: Tyler Anderson will start Sunday with Tony Gonsolin coming off the injured list to start Monday. Julio Urias will start Tuesday with Andrew Heaney coming on in bulk relief. Clayton Kershaw is scheduled to start the finale Wednesday, although his pitch count might be limited.

Fred McGriff is officially a Hall of Famer. The slugger was unanimously elected to the Class of 2023 by the Contemporary Era committee on Sunday night ...Read More