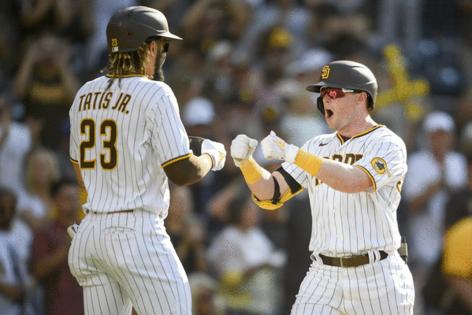 Whether they play in what is colloquially called “October” in baseball — as in, the playoffs —hinges on just one more result.

A 5-2 victory over the Chicago White Sox on Saturday night at Petco Park got the Padres to the brink of the postseason.

And while a victory Sunday or a Milwaukee Brewers loss could be what ultimately gets the Padres into the playoffs for just the seventh time in the franchise’s 54-year history, it was events that occurred some 1,700 miles apart in a span of 60 seconds Saturday night that might be remembered as among the most significant and dramatic moments of the season.

As has happened a few times over the past couple weeks of what has sometimes been a slog to the finish, there was a shift in the playoff race dynamic. It happened suddenly.

Not even a minute after Jake Cronenworth’s two-run homer had cleared the right-field wall at Petco Park to give the Padres a 3-1 lead in the sixth inning, the Miami Marlins scored two runs to take a 4-3 lead over the Brewers in the ninth inning of their game in Milwaukee.

Even before the sixth inning had ended at Petco Park, by which time the Padres had extended their lead to 4-1, the Marlins had finished off the victory.

The Brewers are the second of the two teams chasing the Padres in the race for the two available National League playoff spots.

Since they hold the tiebreaker by virtue of having beat the Brewers four of the seven times they played this season, the Padres (87-71) must reach a victory total that matches the maximum number the Brewers (84-74) can reach. Thus, Saturday’s victory trimmed that “magic number” to one.

The Phillies (85-73) hold the sixth (final) playoff spot, two games behind the Padres and a game ahead of the Brewers.

Fred McGriff is officially a Hall of Famer. The slugger was unanimously elected to the Class of 2023 by the Contemporary Era committee on Sunday night ...Read More