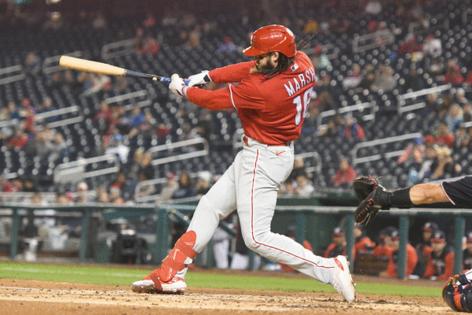 WASHINGTON — At about 4:30 p.m. Saturday, in the 157th game of the season, with a playoff spot in sight, against the worst team in the league, a backup infielder walked to the mound to get the final out of the eighth inning for the Phillies.

But life moves pretty fast, especially in the last leg of a baseball playoff chase. So, a few minutes past 8 p.m., after the swooning Phillies absorbed a 13-4 thumping in the opener of a day-night doubleheader and slid into a tie for the final National League wild card, Kyle Schwarber circled the bases for their fifth home run of an 8-2 rout of the Washington Nationals.

Who knows what Sunday will bring? Besides more rain, of course.

“All year, I’ve said that they’re resilient and they come back and they fight,” Phillies interim manager Rob Thomson said between games. “And they do.”

It didn’t have to be this difficult. The Phillies had a 4 1/2-game lead over the Brewers with 20 games remaining and a 96.3% chance of making the playoffs on Sept. 14, according to Fangraphs. Then they lost 11 of 16 games to turn it into almost a dead heat in the season’s waning days.

The weather is a factor now, too. The teams were scheduled to play a doubleheader Friday, but the nightcap got washed out. The teams squeezed in two games Saturday, but Sunday’s forecast is ominous.