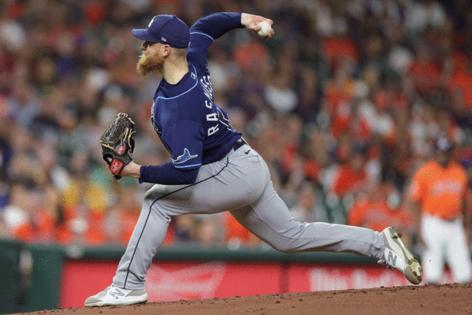 In reaching the postseason for a fourth straight season, the Rays joined the Blue Jays in the three-team American League wild-card field, with the Mariners needing a win in their late game to complete the grouping.

“It’s really exciting,” pitcher Shane McClanahan said before the game. “I’m really proud of this team. We’ve battled all year, we’ve fought, we’ve endured a lot of stuff. And to be in the situation we are now, where we have the opportunity to clinch, is something really special.”

They planned to have quite a celebration, with 200 bottles of champagne and 60 cases of beer (30 Bud, 30 Bud Light) chilled and ready to be popped, sprayed and poured in their Minute Maid Park clubhouse.

Still to be determined over the final five days of the season is the seeding, with a considerable benefit to finishing on top: hosting one the best-of-three, one-site wild-card Series next weekend. The second wild-card team plays at the first, with the third at the AL Central champion Guardians.

The Rays (86-71) are two games behind the 88-69 Jays (who beat the Red Sox) and either 1/2 ahead or behind the Mariners, pending the result of their late game against the Angels.

The Rays were in position to clinch the playoff berth on Thursday, with the Orioles losing in the afternoon. All they needed was a win over Cleveland and they were in. They were on their way, taking a 1-0 lead into the eighth inning but lost as the Guardians rallied, leaving them disappointed.

Friday, they had two chances to get in. One was a loss by the Orioles, whose game started 65 minutes earlier, but Baltimore beat the Yankees, 2-1, their game ending as the Rays were hitting in the top of the eighth. So the Rays had to beat the Astros to pop bottles.

They took a 1-0 lead in the first, sparked by a leadoff walk by Yandy Diaz, who had a big night in his return to the lineup for the first time since Sept. 19. Diaz and Randy Arozarena drew walks, and Harold Ramirez delivered a two-out RBI single.

The Astros tied it with a homer by Alex Bregman off Drew Rasmussen, then took a 2-1 lead in the fourth when Manuel Margot had trouble with two balls hit to right field.