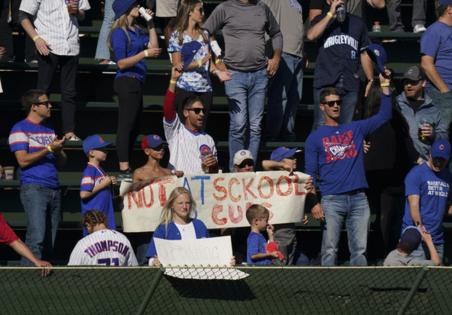 CHICAGO — A Chicago Cubs employee bent down near third base an hour before the team’s 6-1 win over the Cincinnati Reds on Friday and carefully scooped a handful of dirt into a glass vial.

After the season, the vial of Wrigley Field dirt will be mailed to a season ticket holder as a reward for their loyalty to the organization.

The Cubs also acknowledged their fans with a specially cut design in the outfield grass that read “THANK YOU” under a team logo, surrounded by the words “Chicago Cubs Season Ticket Holders.”

You might be wondering why the Cubs are focusing on season ticket holders instead of thanking fans in general for patiently sticking by the team through a second straight losing season. If so, you haven’t been paying much attention to the dwindling crowds of 15,000 or less showing up in September, even as the team mounts a late-season streak that would’ve had Cubs fans jumping for joy in April or May.

Instead of the usual delirium associated with the Cubs enjoying some on-field success, the current strain of Cubs Fever has been tempered by the fact it’s too way little and way too late.

Nevertheless, the win over the Reds was the Cubs’ fifth straight and 13th in 17 games. They have the majors’ third-best pitching since the All-Star break and ended September with a 15-11 record.

“I see us competing,” winning pitcher Adrian Sampson said. “You’ve seen us how we’ve played this last month or so. Pitching and defense, they’re going to win you games and then just keep the guys in the lineup and we’re going to score some runs. Anything can happen.

No one does, but we know the biggest question: