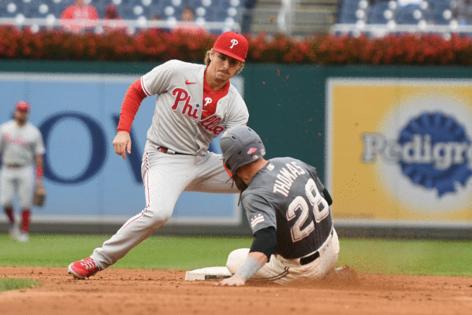 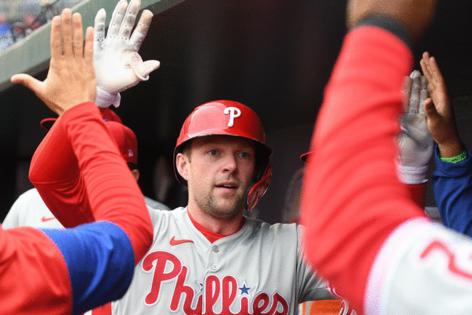 WASHINGTON — Need an elixir for a losing streak? How about something potent to stave off a late-season collapse?

Book an appointment with the Washington Nationals.

The Phillies couldn’t have timed it better. After scoring a total of three runs in three games this week in Chicago and pulling into town on a five-game skid, just a whiff of the air in the D.C. Navy Yard boosted their playoff odds. Heck, they didn’t even have to play particularly well, either.

In the opener of a day-night doubleheader Friday, with the threat of rain looming, Rhys Hoskins smashed a first-inning home run that propelled the Phillies to a had-to-have-it 5-1 victory before a crowd so sparse that noise from a nearby construction site could be heard inside the ballpark.

All season, the 102-loss Nationals have been the Phillies’ punching bag.

Now, they may turn out to be their life preserver.

With their 14th win in 16 games over their once mighty division rival — didn’t Washington win the World Series only three years ago? — the Phillies nudged their lead for the last National League playoff spot to one game over the Milwaukee Brewers, who were due to face Miami Marlins ace Sandy Alcantara on Friday night.

The Phillies and Nationals were scheduled to play again, too. But the weather forecast called for late-afternoon rain that would continue throughout the night and the weekend. Unless the teams are able to squeeze in three more games between the downpours, they may need to reconvene here Thursday to finish out the season if the games prove to be determinative.

And given how badly the Phillies have beaten up the Nationals — and how much they’ve struggled against good teams (the final series of the season is against the American League-leading Houston Astros) — they may need every possible chance to stack up wins in Washington.

Hoskins’ 30th homer of the season, a solo shot against Nationals starter Erick Fedde, provided a rare lead and a chance for the Phillies to exhale. The margin grew to 2-0 in the fourth inning when Brandon Marsh doubled and scored on an RBI single by Jean Segura.