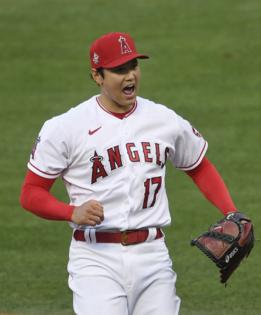 The Angels’ two-way star was just four outs away from a no-hitter in a 4-2 victory over the Oakland A’s on Thursday night, working amid chants of “M-V-P! M-V-P!” from the Angel Stadium crowd.

Oakland outfielder Connor Capel hit a bouncer that ticked off the glove of shortstop Livan Soto, attempting to make a backhand stop, with two outs in the eighth. Dermis Garcia then punched a clean single into left field.

Ohtani allowed just those two hits in eight innings, striking out 10 and walking one.

A no-hitter would have been an impressive addition to Ohtani’s resume as he attempts to win his second straight American League MVP award.

While Ohtani can’t compete with Judge’s offensive numbers, he is having perhaps the greatest two-way season in history, even better than the one that won him the award unanimously last year.

Ohtani took the mound for his 27th start of the season, and his final one at home. With the Angels having dropped out of the pennant race months ago, much of the buzz surrounding the team is about Ohtani.

Before the game, Manager Phil Nevin was asked about the excitement on the days when Ohtani pitches.