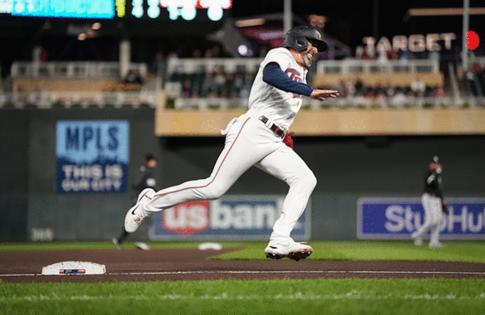 With 22,332 announced fans at Target Field to watch the penultimate home game of the 2022 season, Wallner and Cave combined for five hits, two walks and four RBI. It was enough to keep the 76-79 Twins' miniscule chances at a Wild Card spot alive, at least temporarily. Should the Mariners also win late Wednesday night against the Rangers, that would also officially eliminate the Twins from the postseason.

With Josh Winder on the mound for the Twins, the White Sox took an early 2-0 lead in the second inning from Yasmani Grandal's RBI single and a sacrifice fly from Josh Harrison.

But the Twins immediately responded, putting up four-consecutive hits on White Sox starter Johnny Cueto to start, including Cave's RBI single and a two-RBI base hit from Wallner. The Twins extended their lead in the fourth. with Gio Urshela and Cave making it to base on a single and a double, respectively. Wallner then scored one run on his single before another came home on Ryan Jeffers' grounding into a double play.

Winder exited after giving up a RBI hit to Jose Abreu, allowing six hits with six strikeouts and a hit batter in his 4 2⁄3 innings. Cueto left in the sixth after loading the bases before his replacement, Jake Diekman, walked in a run.

An Andrew Vaughn RBI single in the seventh put the White Sox within two runs, but a RBI double from Jose Miranda gave the Twins a 7-4 lead later in that inning. Luis Arraez' RBI single in the eighth was the final tally.

Wallner homered against the White Sox on Tuesday, which had the highest launch angle (45 degrees) on a Twins homer since Statcast started measuring. It was also the second-hardest hit at 113.8 mph.

"A ball that almost disappeared out of sight into the air and made you kink your neck looking up at it," Twins manager Rocco Baldelli said pregame. "... Matt Wallner can do some impressive things on the field. Some of the things he's already done make you go, 'Wow,' and you even see it on some of the passes that he takes where he's not hitting a home run. You just watch him swing and you know there's something real there."