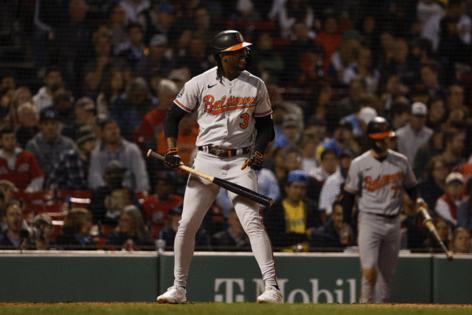 BOSTON — As the clock ticks down on the Orioles' season, there are fewer opportunities to bounce back from performances such as Wednesday night’s at Fenway Park. Against left-hander Rich Hill, Baltimore could mount little offensively, and the Boston Red Sox took advantage.

Left-handed pitchers have been a kryptonite of sorts for the Orioles of late, and without Cedric Mullins, Adley Rutschman and Gunnar Henderson in the starting lineup, there was a noticeable lack of power. That lack of power was felt in the 3-1 loss, with Baltimore unable to back up a solid pitching effort despite a ninth-inning rally that included Henderson walking and Rutschman striking out, both as pinch hitters.

With seven games remaining, the Orioles’ (80-75) magic number for elimination is down to four. The Seattle Mariners hold the tiebreaker, complicating a push for the final American League wild-card spot.

Right-hander Dean Kremer recorded the best performance of his career last week against the Houston Astros, pitching a shutout. In that performance, his curveball and cutter were dominant, and he threw the breaking ball 25% of the time — about 13 percentage points above his season average. Kremer hardly needed to use his four-seam fastball in that outing.

But against the Red Sox, Kremer’s curveball hardly made an appearance; he used it 11% of the time and drew one whiff with it compared to the seven he recorded last week. With the variation came mixed results, with four walks mixed into the three runs on six hits he allowed.

The initial breakthrough came in the first inning, when Alex Verdugo’s single scored Rafael Devers. A well-timed double play eliminated further damage in that frame, but Abraham Almonte and Verdugo later homered off Kremer before left-hander Keegan Akin came in two batters into the sixth inning.

Akin, who had been optioned Monday, returned Wednesday to offer a fresh arm for the bullpen. He was pivotal for the Orioles in his return, covering the final three innings with one hit allowed and two strikeouts. That saved the rest of a taxed bullpen for Thursday’s series finale against Boston, with right-hander Mike Baumann on the mound.

Robinson Chirinos hit his first homer since Aug. 3, but the long ball was all the Orioles could muster.

The season ended for infielder Ramón Urías between second and third base Tuesday night, when he suffered a right knee sprain. He was placed on the 10-day injured list. In the clubhouse, his right leg was wrapped in a soft cast.

In more of an everyday role, the 28-year-old put together a solid year in his third season with the Orioles. He hit .248 with 16 homers and a .720 OPS. Manager Brandon Hyde said Urías’ ability at third base was also impressive.

“In batting practice, he’s got a lot of power to right-center, right field, and that’s what we’ve seen for the last couple years,” Hyde said. “He can back side a ball as well as anybody. But for me this year, taking the next step, being able to pull the ball with a little more authority.”

Hyde said in the long term, Urías “will be fine.” But the injury is an “unfortunate” way to end his season.

— Akin, right-hander Beau Sulser and infielder Tyler Nevin were recalled to the Orioles on Wednesday while right-handers Joey Krehbiel and Jake Reed were optioned to Triple-A Norfolk.

— Norfolk finished its season Wednesday with a loss to the Jacksonville Jumbo Shrimp. The Tides ended the year at 74-76.