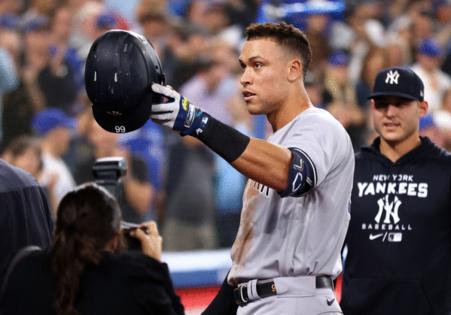 TORONTO — After seven games and eight days without a home run, the frustration started to show. In a 3-2 count, in the seventh inning of a tie game, Aaron Judge stepped back and took a little stroll behind the batter’s box. He took a deep breath as he settled back in and then took one swing to put himself in the history books.

Judge hit his 61st home run, tying the American League single-season record set 61 years ago by Roger Maris. He also powered the Yankees' rally against the Blue Jays en route to an 8-3 victory.

As he rounded second base, Judge raised his right hand in the air and pointed his finger in the air. After he crossed home plate, he hugged Aaron Hicks, who he drove in with the homer, and Oswaldo Cabrera, who was on deck. The rest of his teammates and coaches rushed onto the field and everyone got a hug.

Home plate umpire Brian O’Nora told the Yankees to take their time to soak in the moment. As he walked off the field, Judge took off his batting helmet and pointed to the seats just above the Yankees’ first base dugout, where his mother Patty and Maris’ son were sitting next to one another. They hugged as well.

While Judge, who grew up watching the Giants and Bonds, considers Bonds’ 73 the MLB record, Maris’ 61 had become a weight on his shoulders.

You could see the relief Judge felt after 34 plate appearances without a home run, as he was walked 13 times.

Judge’s two-run shot gave the Yankees back the lead, 5-3, after Gerrit Cole, who also tied a franchise record Wednesday night, had coughed up a three-run lead in the bottom of the sixth.

That snapped the second-longest home run drought of Judge’s season, second only to the 41 plate appearances he went without a homer in August. During those seven games, 10 Yankees homered, the Bombers went 6-1 and clinched the American League division title, but everyone in the baseball world was watching his every at-bat.

With seven games remaining in the Yankees season, Judge has time to build his own number in the AL record books. Bonds' record may be out of reach. Judge has 19 more home runs than Kyle Schwarber, who leads the National League. No player other than Babe Ruth has out-homered the rest of the league by at least 20 homers in a season before. The largest gap was Ruth’s 54 to George Sislers’ 19 in 1920. Ruth also had 59 in 1921 to Ken Williams’ 24 in 1921 and 54 to Hack Wilson and Jim Bottomly’s 31 in 1928.

Like Maris in 1961, Judge was consistent no matter where he was hitting. He split his first 60 homers of the season evenly between Yankee Stadium and the road.

Once again Cole let the home run hurt him. After notching his fourth strikeout of the night to tie Ron Guidry’s single-season Yankee record with 248 to end the fifth. He was working on a perfect game at that point and he came out and gave up a solo shot to lead off the sixth to Blue Jays catcher Danny Jansen. He gave up a single to Whit Merrifield and walked No. 9 hitter Jackie Bradley Jr. Cole then balked to put them both in scoring position. Bo Bichette singled with one out to bring in Merrifield and Vladimir Guerrero Jr. flew out to left field to bring in Bradley to tie the game.

The Jansen homer was the 32nd (career-worst) homer that Cole has allowed this season. While a one-run homer with a three-run lead isn’t counted among the 19 home runs he has given up that have broken a tie game, tied a game or cost the Yankees a lead, this one clearly rattled Cole and led to his unraveling.

Cole allowed three runs on three hits. He walked one and struck out four over 6 1/3 innings pitched.