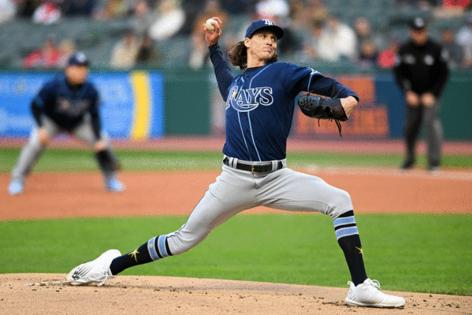 The rest of the night didn’t go as well for the Rays, as they lost 2-1 to the Guardians on a 10th-inning walk-off single by Amed Rosario off Javy Guerra, the eighth Tampa Bay pitcher.

It was the second straight night the teams dealt with a rain delay, this one for 63 minutes during the top of the seventh, then played extra innings.

Glasnow, whose last start was June 4, 2021, allowed two hits — one a homer to lead off the third by Arias — and one walk, while striking out three and throwing 32 of his 50 pitches for strikes, including on the first pitch to nine of his 11 batters.

He started his night throwing a 98-mph fastball for a strike to Steven Kwan, and he was clocked at 99 mph four times, also mixing in his slider and curveball.

Though the Rays lost, their magic number to clinch a playoff berth for a fourth consecutive season was reduced to two with the Orioles’ loss to Boston. Any combination of two Rays wins or Orioles losses will launch the celebration. Of note, the Orioles play the Red Sox at 1:35 p.m. Thursday, so the Rays will know their outcome before they start play.

At 85-69 with seven games to play, they were second in the three-team American League wild-card field, 1 1/2 games behind the Blue Jays, who lost to the AL East champion Yankees, and 1 1/2 games ahead of the Mariners, who were at home and playing late against the Rangers.

The Rays took a lead in the second inning Wednesday.

Ji-Man Choi, a late addition to the lineup when Yandy Diaz was scratched due recurring left shoulder soreness, doubled off Cleveland starter Triston McKenzie, then scored on a two-out single by Christian Bethancourt.

The AL Central champion Guardians tied it in the third when Arias hit a 3-1 fastball from Glasnow 403 feet over the left-field fence.

The Rays were mounting a good threat to score in the seventh, as Choi singled and Isaac Paredes walked, then with one out Taylor Walls also walked to load the bases. That was when the game was halted due to rain.

When it resumed, the Guardians switched from lefty Sam Hentges to right-handed reliever Eli Morgan. He got speedy Jose Siri to hit a ground ball, and shortstop Tyler Freeman, second baseman Gimenez and first baseman Josh Naylor combined to complete a double play.

The Rays had another chance when Manuel Margot led off the eighth with a double, but after Randy Arozarena struck out, Margot tried to steal third and was thrown out. Wander Franco then flied out to end the inning.