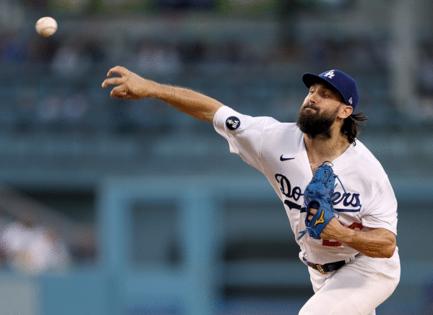 SAN DIEGO — It's probably still more of a hope than a guarantee at this point, but the Dodgers' playoff rotation plans appear to be finally coming into focus.

Before their 4-3 walk-off loss against the San Diego Padres on Tuesday, manager Dave Roberts said the team would like to have a four-man rotation when its postseason begins in the National League Division Series on Oct. 11.

Julio Urías and Clayton Kershaw seem like locks for Game 1 and 2. Tyler Anderson will start a game, as well, Roberts reiterated Tuesday, before the left-hander pitched six strong innings at Petco Park.

The fourth spot is somewhat up in the air. However, if all goes well in the next couple of weeks, Roberts said it's possible that Tony Gonsolin will be back from a forearm strain and ready to handle a start.

It seemed to get brighter Tuesday night.

While the Dodgers opened their series in San Diego — losing the game in the 10th inning after Craig Kimbrel walked Jorge Alfaro with the bases loaded — Gonsolin pitched two scoreless innings in a rehab start with triple-A Oklahoma City. He gave up just one hit in the 27-pitch outing, averaged 92.6 mph with his fastball and used all four pitches in his arsenal. He also did some extra work in the bullpen afterward.

As long as he bounces back well in the next couple of days, Gonsolin's next outing could be back with the Dodgers, who are hopeful of slotting him back into the rotation against the Colorado Rockies next week for what would be his first big league appearance since suffering his forearm strain a month ago.

If Gonsolin stays on track, he could be stretched back out to four innings by the time the NLDS starts.

Of course, that's all contingent on the Dodgers getting good health luck over the next few weeks, something they haven't experienced much of over the latter half of the season.