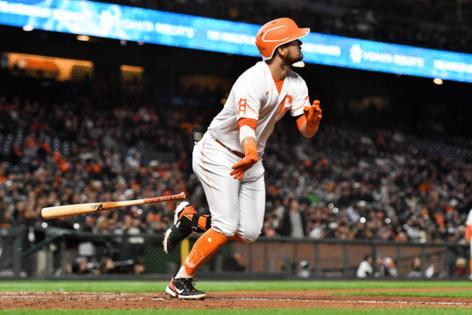 SAN FRANCISCO — Ryan McMahon’s single to lead off Tuesday’s game must have given manager Gabe Kapler a sigh of relief. He’d have no reason to keep Logan Webb on the mound too long in his career-high 32nd start.

Webb struck out the side in the fifth inning and was pulled having thrown just 78 pitches, giving up one run in a 27-pitch first inning with seven total strikeouts and a walk. But that was always the plan. He was in line for his 15th win of the year, the Giants sealed it with a 5-2 win against the Rockies on the first game back from their road trip to Colorado and Arizona.

The 24-year-old has been on a pitch count for his last two starts as the team hopes to limit his workload during the final meaningless games of the season in order to help preserve his young arm. Only three pitchers in baseball have thrown more than Webb’s 192 1/3 innings — Miami’s Sandy Alcantara (220), St. Louis’ Miles Mikolas (199) and Cleveland’s Shane Bieber (195).

His pitch limit was tested in his last turn against the Rockies at Coors Field, where he took a no-hitter into the sixth inning and was pulled immediately after giving up his first hit at 66 pitches. The leash shortened because weather delayed the game an hour.

The Giants erased that one-run deficit quick. Joc Pederson hit a solo home run on German Marquez’s first pitch of the game to dead center field to tie the game. Then Thairo Estrada doubled off Ezequiel Tovar’s glove at shortstop and scored from third on Mike Yastrzemski’s sacrifice fly.

J.D. Davis’ solo home run in the fourth inning extended their lead to 3-1. He went 3-for-4 following up on his third career four-hit game on Sunday.

Joc Pederson — not the fastest runner — hit an RBI triple that bounced off first base deep into foul territory and scored Joey Bart from first base. Estrada singled to score Pederson to make it 5-1.

Camilo Doval loaded the bases in the ninth inning and gave up a run on Alan Trejo’s RBI single, but sandwiched the run with two strikeouts to end the game.