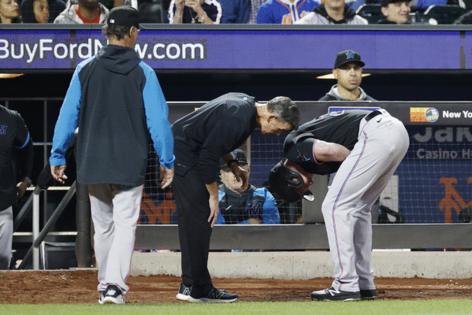 At the end of the best and healthiest season of his career, Garrett Cooper’s awful injury luck struck again Tuesday when he fractured the pinkie on his left hand in the fifth inning of the Miami Marlins’ 6-4 win against the New York Mets.

Cooper got hit by a pitch on his left hand in the top of the fifth inning and immediately went out of the game. X-rays revealed a fracture in his fifth metacarpal, the Marlins announced.

Trevor Williams tried to pitch Cooper high and inside, and the Mets pitcher’s 92-mph fastball got away from him, plunking the All-Star slugger on the outside of his hand. Cooper hopped up and down in pain, and immediately headed back to the visitors’ clubhouse at Citi Field, replaced by rookie Charles LeBlanc as a pinch runner.

Miami (64-90) went on to score two runs in the inning, when catcher Jacob Stallings drove in third basemen Brian Anderson and LeBlanc.

Cooper was playing in his 119th game of the season — a career high — and set a new career mark with his 108th hit of the year to load the bases in the Marlins’ two-run top of the first inning. He has also already set new career bests with 44 extra-base hits and 172 total bases.

After playing only 105 total games in the last two seasons, Cooper stayed uncharacteristically healthy throughout 2022, missing just 10 days in July and August after getting hit by a pitch on his right wrist, and another 10 in August with a concussion.

Cooper has been on the injured list eight times since getting traded to Miami from the New York Yankees in 2017, injuries have twice prematurely ended his season in 2018 and 2021.

“It’s almost comical at this point,” Cooper said in July of his injury luck.

Cooper, however, got the through entire first half of the season without an IL stint — aside from a quick trip to the COVID-19 IL — and the result was the first All-Star berth of his career, making the 2022 MLB All-Star Game as a designated hitter.

The National League’s addition of a DH for the first time this year — excluding the COVID-shortened 2020 MLB season — turned out to be a boon for Cooper, who batted .283 with 21 doubles, seven home runs and a .783 on-base-plus-slugging percentage before the All-Star break. Although he tailed off in the second half, Cooper still entered this quick two-game series against the Mets (97-58) in New York as the Miami’s most productive hitter with a .260 batting average and .750 OPS.