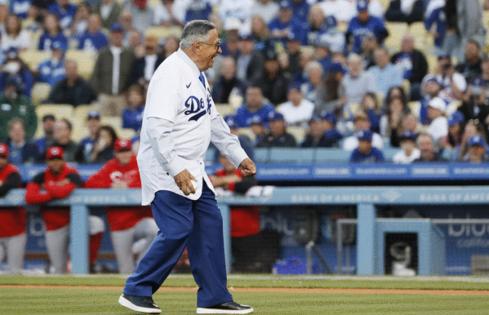 That includes the man who owns the Padres and the man who calls their games on Spanish-language radio.

And to Padres Chairman Peter Seidler, Jarrin was simply always around.

"He was calling Dodgers games the year before I was born," Seidler said. "I have had the real pleasure of interacting with him my entire life."

Seidler and his brother, Tom, one of the Padres' senior vice presidents, are the grandsons of former Dodgers owner Walter O'Malley, who moved the team to Los Angeles before the 1958 season. It was in 1959 that O'Malley hired Jarrin to be part of the Dodgers' Spanish-language broadcast team.

In that role, the Ecuadorian-born Jarrin introduced baseball to an untold number of people in Southern California and became a legend in Mexico, the latter due in large part to his role as Fernando Valenzuela's interpreter at a time when Valenzuela's starts were televised nationally in his native country. Jarrin has also called some of the biggest boxing matches in history, the Olympics and the World Baseball Classic.

"Jaime is the biggest broadcaster, in my opinion, in any sport in Spanish," Ortega said. "… He is only behind Vin Scully in longevity because of the impact he had on a lot of families, especially Mexican Americans in Los Angeles."

At 86, Jarrin is retiring at the end of the season.

The Padres will honor him at home plate before the start of Tuesday night's game against the Dodgers.