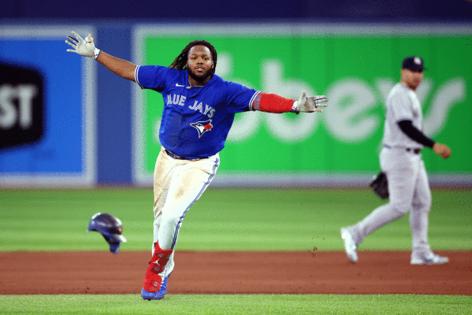 TORONTO — The waiting is the hardest part.

Vladimir Guerrero Jr. lined a walk-off RBI-single in the bottom of the 10th to give the Blue Jays a 3-2 win over the Yankees at Rogers Centre Monday night. Toronto also held Aaron Judge homerless. The division-winning celebration and history will have to wait another day.

For the sixth straight game, Judge did not hit a home run. He remains at 60 for the regular season and one shy of the American League single-season and Yankee franchise record set by Roger Maris in 1961.

Monday was a little different than the last five.

Every time he came to bat over the last five nights, the sold-out crowd at the Stadium rose and held up their phones, hoping to record history. There was an eerie quiet of expectation as each pitch was thrown and then — even for doubles — a groan of disappointment. His family has been in the ballpark since the team returned from a road trip to Milwaukee on Tuesday night and Maris’ family has also been there to wait and congratulate Judge if he breaks their father’s record.

It’s been a lot, but Judge has continued to downplay it.

“I’ve played in New York for six years now, this is par for the course, especially the playoff games we’ve had, opening days are hectic,” Judge said. “It’s just another game to me.”

Monday there were cheers and some boos for the one walk, but the Blue Jays are playing for a postseason spot, so their fans, most of the 34,307, were thrilled to see Judge held within the ballpark.

The biggest question was when. You can’t often say that about $300 million contracts. But Trea Turner’s was one of them. That’s how much sense he made for the Phillies. And if the Phillies were willing to pay him $27...Read More

SAN DIEGO — Here at baseball’s annual Winter Meetings, it doesn’t take long to understand the hottest issues on the table.

The Yankees’ pursuit of Aaron Judge is clearly No. 1.

SAN DIEGO — A Hall of Fame cycle that seems poised to bring good news for one former Cardinal and Cooperstown hopeful in Scott Rolen has presented some bad news for another, if you read between the glaring lines.

Things are heating up at the winter meetings.

The Braves, like their competitors, are exploring ways to ...Read More

With the Winter Meetings happening in person for the first time since 2019, Major League Baseball’s executives got going right away on Monday.

Justin Verlander jumped to the Mets on a two-year, $86 million deal, marking...Read More

SAN DIEGO — The Phillies got their man.

Trea Turner, the Phillies’ top target all along in a free-agent market overflowing with star shortstops, has agreed on an 11-year, $300 million contract that includes a ...Read More