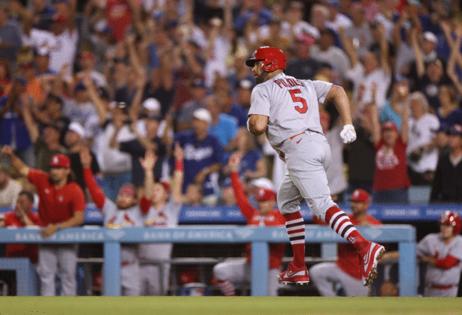 With the bravado and timing that the Cardinals have come to expect from one of the best to ever play the game, Albert Pujols made history – and sparked the present.

The Cardinals’ designated hitter hit the first two home runs of the game – the 699th and 700th of his career – and started what became a power showcase for a team only hours removed from a series of frustrating shutouts. Pujols became the fourth player in Major League Baseball history with 700 career home runs, and by the time the Cardinals had completed their rout of the Dodgers, rookie Alec Burleson had become the latest to hit his first career homer.

The Cardinals hit five total in a 11-0 romp at Dodger Stadium.

After Pujols drove home the first five runs of the game with his two milestone swings, some of the youngest Cardinals followed with homers of their own. Lars Nootbaar hit the 19th of his career, Juan Yepez the 12th of his career, and Burleson’s first homer, a solo shot in the eighth inning, punctuated the evening for the Cardinals. Dylan Carlson outfitted the box score with a couple doubles all his own. Including rookie Brendan Donovan’s grand slam Thursday in San Diego, the Cardinals have gone from three consecutive shutouts to a bonanza of power with six homers in their past 12 innings.

Not to be lost in the updraft of power was the pitching performance from lefty Jose Quintana.

Against the 104-win Dodgers, who long ago clinched the division title and are going to have homefield advantage in the NL playoffs, Quintana kept them scoreless through his 6 2/3 innings. In 10 starts for the Cardinals since the trade deadline, Quintana (6-6) has yet to allow more than two earned runs in any appearance. His win against the Dodgers was his second consecutive scoreless start – a span of 14 2/3 innings.

The Cardinals started sluggishly against Dodgers starter Andrew Heaney. Pujols, batting second to get more swings against the lefty, struck out in his first at-bat. The Cardinals had one hit through the first turn through the lineup, and Heaney had three strikeouts.

Then the show started.

Pujols drilled a two-run homer 434 feet into the Dodger Stadium bleachers to make Heaney the 455th pitcher he’s hit a home run against. In the fourth inning, the Dodgers opted to avoid an encore. Phil Bickford, a right-hander, came into the game. Pujols greeted him all the same. Pujols sent No. 700 into the seats beyond left-field for the 5-0 lead and the place in the club with fellas by the name of Babe, Barry, and Hank. The game stopped briefly to acknowledge Pujols' accomplishment and a highlight reel of his significant homers played on the Dodger Stadium scoreboard.

His teammates took over from there with highlights of their own.

Nootbaar hit a two-run homer in the fith inning. Yepez drilled a solo homer in the seventh. Burleson followed with his home run in the eighth inning.

Quintana faced the minimum through three innings, pitched around two singles in the fourth inning, and was really never tested by the best offense in the majors. In the sixth inning, Nolan Arenado turned a double play at third base to end the inning and tie Ken Boyer’s club record with his 41st double play as a third baseman. Quintana struck out the only two batters he faced in the seventh inning to finish his outing.

He allowed only five hits and struck out six.

The Cardinals' lead became so bloated by the late innings that the Dodgers swapped out some of their regulars, and the Cardinals followed that lead. Neither Paul Goldschmidt or Arenado finished the game on the field. Outfield Corey Dickerson did — on the mound.

The win dropped the Cardinals magic number down to four. Any combination of their wins or Brewers’ losses that equal four, and the Cardinals will clinch the National League Central crown.