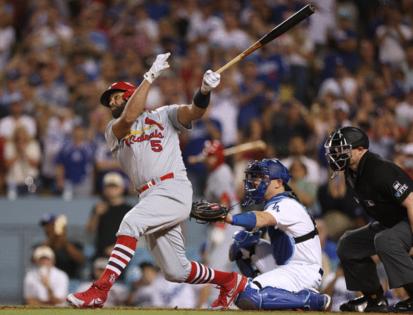 LOS ANGELES — With one swing, that familiar snap of his shoulders, and the signature glare as a baseball vanishes in the distance, Cardinals great Albert Pujols launched himself into one of the most exclusive clubs in baseball.

He’ll need to update his autograph.

One inning after he launched the 699th home run of his career, Pujols hit his 700th to join Hank Aaron, Babe Ruth, and Barry Bonds as the only players in Major League Baseball history to reach the once unreachable milestone.

Pujols' second homer of the game came in the fourth inning off Dodgers reliever Phil Bickford. Pujols had homered in the third inning off starter Andrew Heaney. The three-time MVP was celebrated before the game as a former Dodger, and he took the microphone to thank the crowd for "bringing back the joy" he first had playing the game as a boy.

He then brought that joy to them.

The crowd was euphoric as if he was still a home player, and after rounding the bases for the 700th time in his career, he went to clasp hands with former player Adrian Beltre. It was Beltre's career record that Pujols broke to become the all-time leader in hits by a player not born in the United States.

A few weeks after describing how proud he was to represent his country, the Dominican Republic, in the chase for 700, Pujols is the first Latin player to join the club and the first member who was not born in the United States.

All season, visiting players have sent armfuls of items over to the Cardinals’ clubhouse for Pujols to sign, and on several of them he lists his three NL MVPs and round-number achievements such as 3,000 hits, 2,000 RBIs, and 600 home runs. They’ll need a rewrite.

“If God has that in store for me, I will be blessed,” Pujols said as he approached No. 700.

The rush toward 700 happened fast as Pujols came out of his All-Star Game appearance and Home Run Derby with one of the finest second halves of his career. At 42, he slugged .803 in August and had a 1.049 OPS in the first 44 games after the All-Star break. His 700th homer was his 21st of the season — 13 of them coming after Aug. 1.