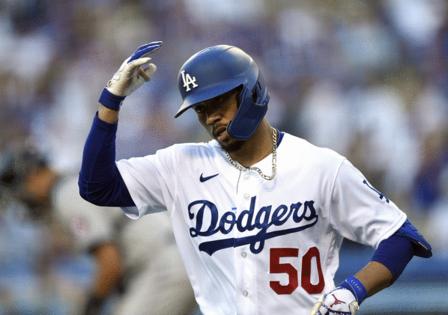 LOS ANGELES — Four hours before the Los Angeles Dodgers defeated the Arizona Diamondbacks 3-2 Thursday on a walk-off hit by Mookie Betts, the eyes of everyone in blue were riveted on the Dodger Stadium pitcher’s mound.

Nobody needed to state the obvious: What they were witnessing could seriously alter their postseason fortunes.

Tony Gonsolin, on the injured list since Aug. 29 with a forearm strain, was pitching to teammates Gavin Lux, Chris Taylor, Hanser Robles and Miguel Vargas. The All-Star right-hander held nothing back, throwing his four-seam fastball, slider, curveball and split-finger fastball.

Gonsolin, whose injury interrupted a breakout season that includes a 16-1 record and 2.10 ERA, took a break while reliever David Price — also on the injured list — faced the same four batters. Back came Gonsolin for another frame, and when he was done with the two-inning simulation known as an “up-down,” there were guarded smiles all around.

“I thought the stuff was good, the arm speed was good, and he used his entire pitch mix, which was great,” Roberts said. “Assuming he comes out of it OK, there’ll be a bullpen in a couple of days, then another live two-to-three inning, hopefully, up-down. Really encouraging for Tony.”

Just as encouraging was the ninth-inning rally to overcome a 2-1 deficit than enabled the Dodgers to split the four-game series. Cody Bellinger led off with a double — just missing a home run — and Will Smith and Max Muncy followed an intentional walk to Freddie Freeman with infield singles to tie the score. With two out, Betts pinch-hit for Joey Gallo, fouled off a full-count pitch and drove a single to left field to score Freeman.

Betts had the night off, but took some hacks in the batting cage in the ninth inning in case he was needed.

“I was hoping not to hit,” Betts said, “but you get into a situation that calls for it and you turn your brain on and you are ready to go.”

Dodgers closer Craig Kimbrel, as wobbly as ever, was touched for Christian Walker’s home run in the top of the ninth, snapping a tie in a game highlighted by the dominant pitching of Diamondbacks starter Zac Gallen, who struck out 13 in eight innings.

The Red Sox said they were going to come right after Aaron Judge in this series, but they didn’t stick to their word.

At least they kept him in the park.

Judge was walked three times, struck out once and came within a ...Read More

PITTSBURGH — Everything about Thursday night’s Pirates game against the Chicago Cubs felt a little off.

PHILADELPHIA — Good teams find ways to win when some things aren’t clicking, and for the Phillies, that thing, right now, is their offense. So, on Thursday night they beat the reigning World Series champions with their...Read More