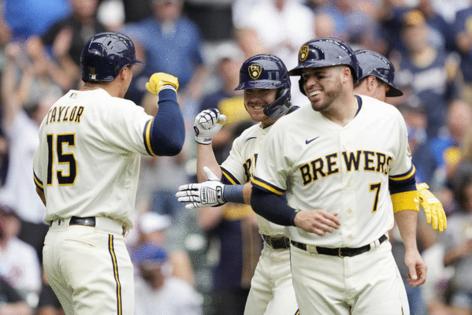 A game that got off to an ominous start for the Mets ended with a 6-0 loss to the Brewers.

Brandon Nimmo exited in the bottom of the first inning with left quad tightness. Jeff McNeil also jammed his knee into the ground while pursuing a fly ball in the third inning, and though he didn’t leave like Nimmo, he certainly didn’t look right after that. Trying to rob Mike Brosseau’s pinch-hit grand slam in the seventh inning didn’t make things any better, as McNeil got tangled in the chain link fence in left field chasing a ball he had no chance of catching.

It was a strange afternoon in Milwaukee to say the least. The Mets know that they can rest any player who even has a troublesome hangnail and still have their guaranteed spot in the playoffs, but they also know that doing so is an invitation for the Atlanta Braves to overtake them in the National League East. This puts manager Buck Showalter in the unenviable position of having to manage little bumps and bruises versus the pressing desire to win the division.

The loss on Wednesday serves as a direct opponent to that second goal. Atlanta lost to the Nationals, meaning a Mets win would have added some space between them and the Braves. Instead, the lead remains one game, although the Mets can breathe a little easy knowing their next three games are in Oakland (with a day off on Thursday) while the Braves face much stiffer competition in Philadelphia.

The offense was just non-existent for the Mets in this one. After putting up seven runs apiece in each of the series’ first two games, they finally ran out of magic. Despite not getting a single strikeout in the game’s first six innings, Milwaukee’s pitchers held the Mets down and refused to let them get up. The final four pitchers that Brewers’ manager Craig Counsell called upon (Trevor Gott, Brad Boxberger, Brent Suter and Jake Cousins) kept the Mets from getting a single hit in their four innings of work.

The only real storylines for the Mets now (aside from the injuries to their outfield) are remaining ahead of Atlanta in the divisional race and figuring out their bullpen for the playoffs. Two nights after Tylor Megill came back from injury, letting up a two-run blast to Rowdy Tellez in his first audition, Drew Smith met an even crueler fate on Wednesday.

Smith had a strain in his right lat muscle and had not pitched for the Mets since July 24. Wednesday was his first chance to reclaim those good feelings he had in April and May, when he put up a 2.38 ERA in 21 relief appearances. Instead, he threw the pitch that Brosseau slammed over the wall to give the Brewers four late runs. Down by half a dozen runs at that point, the invisible white flag sort of went up, as victory no longer looked plausible for the visiting Mets.

These three games in Milwaukee were still very much a rousing success, though. The Mets won the series, played their way into the postseason while indulging in a champagne party, and only lost when they ran into the dreaded day game after a night game.

Next time the team is at home, for two games at Citi Field against the Marlins, there’s a great chance they will be going for their 100th win of this miraculous season.